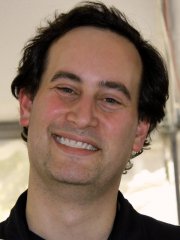 Scholastic editor and author David Levithan will speak on May 31st at PP’s Children’s Publishing Conference trends in YA fiction and what’s next for this segment. More about this conference »

David Levithan found himself “monumentally bored” as a high school junior in A.P. Physics class. So he began searching the textbook for romantic terms: “opposites attract”; “magnetism.” He took the list of terms and turned it into a story. He didn’t have a Valentine, and neither did most of his friends. So David Levithan wrote a Valentine’s Day story of friendship for his friends. That was 23 years ago. He’s been writing a Valentine story for his friends ever since. David Levithan is all smiles

Boy Meets Boy (Knopf, 2003), Levithan’s first published book, began as a Valentine story. One of his friends, Shana Corey, asked if she could share it with Nancy Hinkel, v-p and publishing director of Knopf Books for Young Readers. “In its blithe acceptance and celebration of human differences, this is arguably the most important gay novel since Annie on My Mind,” wrote Booklist, “and seems to represent a revolution in the publishing of gay-themed books for adolescents,” Hinkel also edited several of Levithan’s other books, including Nick and Norah’s Infinite Playlist, co-authored with Rachel Cohn, which was also made into a major motion picture.

Levithan started in publishing on the other side of the table, however, as editorial assistant to Bethany Buck, who was editing the monumentally successful The Baby-Sitters Club by Ann M. Martin at Scholastic. That was the only publisher listed when Levithan went to the Brown University library, as an undergraduate seeking a summer internship. Luckily, Buck’s assistant left just before Levithan was to start his internship. “It never occurred to me that thinking like a 12-year-old was my calling,” he admits. This June, Levithan will celebrate 20 years with Scholastic. One of Levithan's many inspired ideas...

Balancing Life as an Editor and Writer

So how does he separate his editorial and authorial sides? He is, after all, the founder of Scholastic’s PUSH imprint, the editor of The Hunger Games and a driving force behind the 39 Clues multi-platform phenomenon. He edits during the week, and he writes on the weekends. And he carves out time for writing retreats. “I love my day job and will never leave it,” Levithan says, “but I envy people who can gather in coffee shops and write all day. When I go away, often times it’s with other writers, and my best writing happens at a kitchen table with another writer a few feet away.”

It makes sense then, that many of his books are collaborations, and that the collaborative nature of what he calls his editorial “idea group” at Scholastic often generates ideas for other authors to run with. 39 Clues is one such example of the editorial group “chiming in and chiming in” until they arrived at a multiplatform idea, according to Levithan. Rick Riordan had moderated a panel on which Levithan spoke (he tempted Riordan to write The Maze of Bones, the debut book in the 39 Clues, with the invitation, “Here’s our straw, now turn it into gold”). And the novel Beauty Queens also originated with the idea group. Levithan asked, “What’s the female equivalent of Lord of the Flies?” and AnnMarie Anderson replied, “A plane carrying teen beauty pageant survivors crashes on an island.” Levithan knew just the person to write it. Going Bovine had not yet been published, but Levithan knew that Libba Bray had a comic side, completely different from what she’d exhibited in her Gemma Doyle trilogy (begun with A Great and Terrible Beauty). Adult fiction or YA? It doesn't matter

The last thing Levithan would do is confine someone to a category. He doesn’t buy the idea that boys only read boy books and girls only read girl books. Teens read adult books and adults read teen books. Having suffered the constant question aimed at YA writers, “When are you going to write an adult book?” he is proud to say that writing his book The Lover’s Dictionary, a love story between two adults that unfolds through word definitions (and also one of his Valentine stories, by the way) was no different from writing his YA books. “The coefficients were different in terms of the marketing,” Levithan observes, “but in terms of the writing it wasn’t different at all.”

“The fundamental fact is that emotions don’t change,” Levithan explains, no matter how old we get or what gender we are. “Wanting to belong, questioning love when it arrives, or doesn’t. We falsely claim there’s a difference from an adolescent or an adult going through it. There’s a tinge when it happens the first time, but if it’s emotionally true they’ll relate to it.” What’s changing are the tools for storytelling, Levithan points out. “They are just advancing and advancing and advancing,” he says. When Infinity Ring launches in August, what kids can do online will be way ahead of where they were four years ago when 39 Clues launched, according to Levithan. They’ll be able to interact with historical figures to solve puzzles. “I don’t think it will erase traditional publishing,” he says. He believes there’s room for 39 Clues and Infinity Ring as well as The Hunger Games.

“Everything comes down to a kid reading the words and using their imaginations to color in the words,” says Levithan, “but the way we can engage them continues to change.”

David Levithan is a featured speaker at the Publishing Perspectives Children’s Book Conference, “What Makes a Children’s Book Great?” on May 31st in New York City. Seats are limited, but still available. Register here.