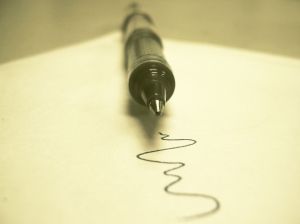 I’ll admit it, I’ve never been much of a fan of book signings. Somehow, I’m always a little bit disappointed, or maybe I have simply become spoiled by access to authors, which has left me somewhat inured to the celebrity of writers. That said book signings are a staple of publishers’ marketing and promotion efforts worldwide. The fans flock to meet their favorite writers in person. It’s expected that the writers will take the time to meet their fans; and it’s expected that the fans will take the time to appreciate them by buying the book and asking for to be signed.

With emerging technology, like the iDoLVine project, it’s now possible for authors to offer remote book signings. Several years ago when Borders bookstores was launching their new store format, Margaret Atwood’s LongPen was part of the initial promotion. I stood and watched as Atwood bantered lightly with several fellow journalists before signing a copy of one of her most recent paperbacks. I was standing in Ann Arbor, Michigan while she was at home in Canada. While there was a “gee whiz” factor to the whole experience, the end result was much the same: a book with a signature in it. To me, the experience felt peculiarly empty, with a souvenir of the day that lacked any genuine personal connection.

Part of the thrill of meeting an author — or any celebrity or person of which you are a fan — is to bask in their personal orbit, to absorb the power of their personality and feel its effect on you. Anyone who has met a movie star has felt that ineffable “star quality” first hand; you know immediately why it is that this short/homely/gorgeous/peculiar person is a star. With authors, that may or may not be the case. But the fact remains that in the same way a Skype video call cannot replace personal interaction, I don’t believe a virtual signature can quite replace the experience of standing in line, waiting your turn, and exchanging 30 seconds of repartee with a real live author. It somehow feels a wee bit like a cheat.