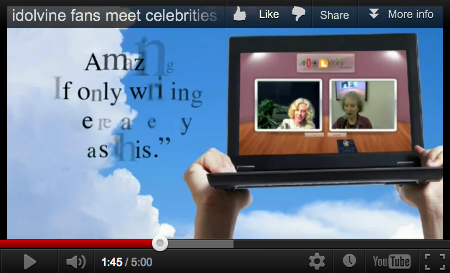 iDoLVine is not a mere substitute for the traditional signing but rather as a new kind of experience with different and exciting possibilities.

LOS ANGELES: In 2004 Margaret Atwood made headlines when, tired of traveling long distances to attend book signings, she came up with the idea of the LongPen — a remote signing device which would enable her to inscribe books in far-off locales without leaving the comfort of her own home. With little more than a tablet PC, an Internet connection, a remote signing device and audio/video link at the other end, it was now possible for an author in Ontario to sign books for fans in Ulaan Bataar, Mongolia. Although a novel idea, the LongPen was no mere novelty and soon government, banks and corporations around the world were using it to centralize the execution of documents as a cost-saving and productivity increasing measure. Now the LA-based firm iDoLVine hopes to massively expand its usage in entertainment applications.

We spoke with iDoLVine executive chair Daniel Edelman vie email to catch up on company’s plans for (entertainment) world domination.

“I joined iDoLVine last August as Executive Chair,” says Edelman. “I’m based in Los Angeles, which is where we will next expand the company as we launch into the various entertainment industries — sports, music, publishing (including graphic novels) and film/TV celebrities. I started my career in talent management, ended up in film production and in between ran the London-based literary agency, Curtis Brown, through a period of transition and growth. Margaret Atwood was and still is a client of Curtis Brown, which is how we met.”

iDoLVine made a splash last year with a major event in May at BookExpo America 2011. Participants included Neil Gaiman, Michael Chabon, Margaret Atwood and others who used the LongPen technology to sign physical and e-books around the world from a booth in New York. Spectators and participants were impressed; but, I asked, how does the company plan to build on its auspicious debut?

Watch the iDoLVine demo with Neil Gaiman (but be warned, turn down your speakers, the music is obnoxious):

“Since last summer, iDoLVine has a new business plan, a new beta theater (online, live event space for meeting artists and where digitally signed products can be delivered), and new relationships developing with potential trading partners. The strongest feedback in publishing comes from our patent-protected technology to sign digital products (e-books) without having to unlock any DRM protection. And our patents, which are now granting, make us the only company that can deliver personalized, dedicated or signed as the result of a video/online interaction.”

Edelman stresses that iDoLVine has a much wider range of applications than government business and author signings. The public hunger for personal mementoes from superstars and celebrities is as strong — if not stronger — in other entertainment fields, and iDoLVine has an exclusive license on the technology in these contexts:

“We are also the only providers of LongPen wet signatures on physical products — printed books, CD’s, DVD’s, t-shirts, etc. In the sports business, the ability to sign and deliver authentically autographed sports jerseys or hockey sticks (anything flat) is an attractive addition to the instant gratification of a digitally personalized and signed image (headshot, action photograph, team logo)…iDoLVine has an exclusive license in the autograph/entertainment applications and a trading relationship with Ingram Content Group where a LongPen is currently being integrated into the fulfilment operations (books, CDs, DVDs, Print-on-Demand products and many others that can be added to their inventory for special events, including concert t-shirts, for example).”

But how does a fan’s “personal” encounter with his or her favorite author or sports star compare to actual physical contact when it is mediated through a computer screen and robot hand? The advantages for exhausted or financially strapped writers are clear; but is the fan getting a good deal? Edelman argues that the iDoLVine should not be seen as a mere substitute for the traditional signing but rather as a new kind of experience with different and exciting possibilities:

“iDoLVine has held events hosted by authors, musicians and other celebrities. We’ve learned that not only do artists like the convenience and control offered by remote, online “meeting and greeting” of their fans, but that fans find the experience to be more intimate and personal, more resonant and memorable, than public signing sessions. Audiences love a glimpse behind the scenes, to where and how creativity occurs, and combining that with a one-on-one interview AND a personally dedicated and signed product — whether a memento or media product — makes the iDoLVine offering a new product rather than a replica or replacement.”

And yet for all the excitement that iDoLVine has generated with these events, Edelman reaffirms a company policy of solid, steady progress rather than massive hype and sudden, rapid expansion:

“Our next steps are in two directions. We are starting to work with potential partners who want to use parts of our offering within their environment – as a way to build customer loyalty and expand the experience beyond the moment of purchase. And we are raising money to complete the full build of our own site, where events can be spontaneous or scheduled, self-produced or managed, VIP or general audience, free or paid (or for charity) and where a social connection can occur among fans that lead to discovery of new artists, new works and new friends.”

DISCUSS: Is a Virtual Book Signing as Satisfying as Real Life?