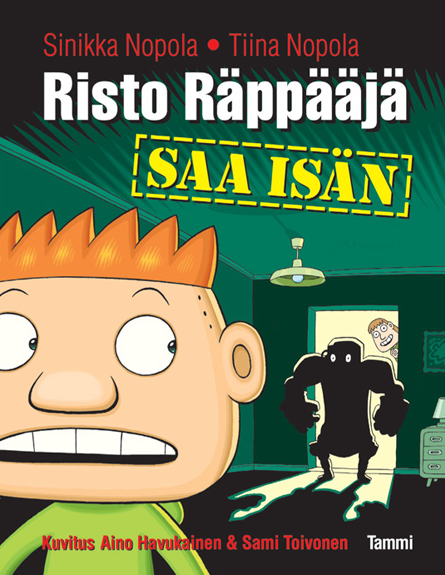 “Writing together comes naturally, because we have the same understanding of language and the same sense of humor.”

Finland’s Sinikka and Tiina Nopola are sisters who have written over 30 children’s books together and have received countless awards for their efforts, including the State Award for Children’s Culture, presented by the Arts Council of Finland as acknowledgment of their distinguished work. And their works aren’t just critically acclaimed; their bestselling book series feature some of the best-loved, most popular characters in Finnish children’s literature: Hayflower and Quiltshoe (a 13-book series following the adventures of two sisters — one sweet and responsible and one high-spirited and adventurous), and perhaps most importantly, Ricky Rapper. The Ricky Rapper series, published by Tammi, has sold over one million copies to date worldwide. It features, naturally, a young boy named Ricky Rapper who loves playing the drums and, not surprisingly, rapping. (A sample rap from Ricky the Rapper and Noodlehead: “Ooo, baby baby, dab daba dooo, baby baby, bub bubba dooo. You got noodles on your head, they bob up and down. Wanna talk with you, walk with you, around the town…”)

Since the publication of the first title, Time’s Up, Ricky Rapper, in 1997, 11 additional titles have been written, winning Platta awards in 2002 and 2004. There have been animated versions, plays, musicals and three movies, all with scripts written by Sinikka and Tinna Nopola. The latest in the series, Ricky Gets a Dad, was Finland’s bestselling children’s book of 2011; Ricky is the number-one children’s book character in Finland. While his adventures have been translated into Swedish, Danish, Estonian, Polish, Bulgarian, Hungarian and Japanese, they’ve yet to be translated into English.

Inspired by Sinikka’s son, who built a drum set out of dishes and buckets before he was old enough to go to school, the series has been successful far beyond the sisters’ wildest dreams. And the siblings find it difficult to say exactly why Ricky is so popular. “Ricky is a pretty sensitive boy who sometimes expresses his thoughts and feelings by rapping, but he’s also a little comical,” the sisters wrote. “Maybe the reason why Ricky Rapper is the first book so many boys read on their own is that it’s easy for them to relate to the character.”

“Another reason is probably the humor, the adults in the books are always messing things up, and sometimes the children — Ricky and his best friend Nelli — are more sensible than the adults. Our books never have a specific moral. We do use humor to deal with difficult subjects though, like Ricky’s computer addition, which was the theme of the book Ricky Rapper and the Runaway Machine. Our books operate at different levels for children and adults. Readers of different ages laugh at different things and understand the text in their own ways.”

For Sinikka and Tiina, writing the books is very much a family affair. Each new book is inspired by an incident that happened to them or to someone they know. And after all those books together (along with books for adults written by Sinikka and the Siri series of books for children by Tiina), the sisters seem to have the art of writing as a team down to a science. “Writing together comes naturally, because we have the same understanding of language and the same sense of humor. The rhythm of language is extremely important for us. We carefully consider the order of words and make decisions about every comma, period and exclamation point together. Because we’re siblings, we can disagree about things and say what we think without being afraid the other person will be hurt. We also have a lot of fun writing together. Maybe that’s the reason we’ve been doing it for 23 years!”