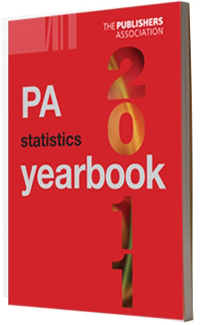 On May 1, the Publishers Association (PA) of the UK released their Statistics Yearbook 2011, a report on the performance of the UK publishing market. According to the Yearbook, digital sales — specifically e-books, audio book downloads and online subscriptions — accounted for 8% of total invoices sales of books in 2011, up from 5% over 2010.

In the academic and professional segments, digital products account for 13% of total book revenues. Book sales to schools grew by 6.1% to £271 million.

“Across fiction, non-fiction, children’s and academic books, the story of the year is a decline in physical sales almost being compensated for by a strong performance in digital,” said PA Chief Executive Richard Mollet, in a prepared statement.

“That said,” Mollet continues, “physical books remain the format of choice for the vast majority of British readers, underlining the continued importance of a strong ‘high street’ sector.”

The PA collects data for the Yearbook from 2,240 publishers representing 100% of UK publisher sales, and 70% of total UK book sales