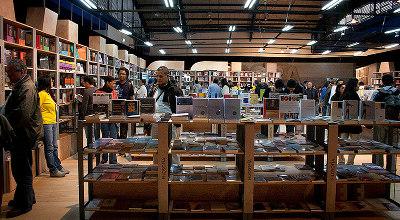 Few cities in Latin America are more dissimilar than Bogota and Buenos Aires. Bookishly speaking, try to imagine them as the urbanite overgrowths of the baroque joy of Garcia Marquez and the astonishing gravitas of Borges, respectively. In April 2012, both towns opened their international book fairs within 24 hours — and displayed disparate ways of gaining clout in the region.

While Buenos Aires presented itself as the future center of professional training for the region, with initiatives like the first Latin America-based Tools of Change conference, the Bogota International Book Fair had a trend-setter giant as guest of honor — Brazil, which will also be a leading figure at the Frankfurt Book Fair later this year as it prepares to be the focus of the fair in 2013. The Brazilian pavilion in Bogota

The Brazilians contributed to the success of the fair with their energetic and expanding industry, according to Enrique González Villa, president of the guild Cámara Colombiana del Libro, which organizes the event. With 30,000 Brazilian titles featured in a 10,000-square-foot showroom, the attraction drew readers and professional visitors in equally large numbers; the Brazil pavilion, conceived by stage designer Daniela Thomas, received a total of 300,000 visitors.

As a well-behaved guest, Brazil did whatever it could to entertain the host and bear out its own reputation. Surrounded by Spanish-speaking neighbors, Brazilian publishers have discovered, out of necessity, that publishing is a global business — more than 40% of the books exhibited were in Spanish. They came to Bogota with 55 contemporary writers and honored their universal classics, like Clarice Lispector and Jorge Amado. And because business also means fun in these parts of Latin America, the fair closed on May 1st with Orquestra Voadora, which recreated the splendor of a Rio de Janeiro carnival (watch video below).

The Bogota Book Fair received a total of 415,000 visitors, generating $20.4 million dollars worth of business among the 100 buyers from abroad, 220 Colombian businesspeople, and visitors from Latin America, France and the United States.

The fair is the third in size and importance in the region.