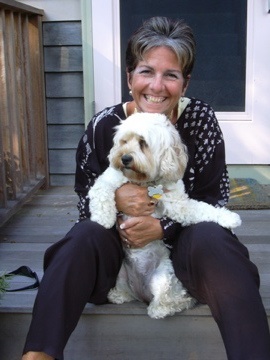 Agent Rosemary Stimola will speak on May 31st at PP’s Children’s Publishing Conference about agenting in the digital age. More about this conference »

“I still look for those properties that speak to me personally, and I still look to my network of editor relations to find the right place for them. And after that, everything else just follows.”

Rosemary Stimola is founder and president of Stimola Literary Studio, a full service literary agency established in 1997, with the aim of representing authors and author/illustrators of fiction and nonfiction for preschool-aged children through young adults. Her clients include such award-winning and best-selling authors as Suzanne Collins, Matthew Cordell, Thanhha Lai and Tanya Lee Stone. Rosemary Stimola and her dog Zoe

Unlike many agents Stimola began her career not in publishing, but with a PhD in linguistics and a position as a teacher of language and literature at the City University of New York, specializing in children’s literature. Before starting her agency, she set out to educate herself in the business of book publishing, while at the same time winning awards as the owner of the nationally known bookstore A Child’s Story in Teaneck, New Jersey.

It has been a life based on a love of reading and of books — and of getting books into readers’ hands. When asked how a literary agent’s life has changed since she entered the field, Stimola is quick to point out three major factors: the economy, digitization and publishers’ shrinking mid-lists.

“First of all, there’s the overall economic climate that drives publishers to acquire or not. Some years ago, publishers were acquiring a great deal more, so now there’s greater selectivity. I’m not saying that’s a bad thing, but you can longer put material out there and know it’s going to be acquired. There are things I probably could have sold five to six years ago, but that I know today I’m going to have a really hard time pushing through.”

Stimola also acknowledges that the changing digital landscape has complicated her role. But whether it’s e-books, multimedia or “formats not yet developed here or on Mars,” her role as agent is still to ensure that the rights of her authors are protected and they are properly compensated for their work.

And finally, she insists, the label “mid-list” has become an obstacle to acquisition in and of itself. “Years back, mid-list was still considered an ‘ok’ thing. They didn’t need to sell 100,000 copies in the first week, but those books chugged along and sustained themselves. And the expectations for them were such that they would do exactly that, so they were successful in the eyes of publishers. Now, people are leaning towards big. They’re more reluctant.”

But luckily there are still some exceptions, Stimola assures:”Look at Thanhha Lai’s Inside Out & Back Again (Read our profile of Lai here.) When I took that book in, I though to myself that I could probably write my own rejection letters…but thankfully I did find that editor who saw what I saw and then she had to fight for it. But here we are: the book won the National Book Award and a Newberry Honor. I think things can become big. Sometimes through a calculated effort on the part of the publisher, or more often than not they rise to the surface as they appropriately should.”

“I do what I do,” says Stimola. Trusting her inner compass in spite of increasingly difficult conditions remains the best approach. “I can’t say the fundamental work has changed, but the climate has changed. I still look for those properties that speak to me personally, and I still look to my network of editor relations to find the right place for them. And after that, everything else just follows.”

Rosemary Stimola, along with fellow agents Ken Wright and Erica Rand Silverman, will be taking part in the Publishing Perspectives Children’s Publishing Conference, in a panel entitled “Blockbusters, Bestsellers and Everything in Between: Agenting Children’s Books,” moderated by Peggy Intrator. It has all the makings of a fascinating talk.