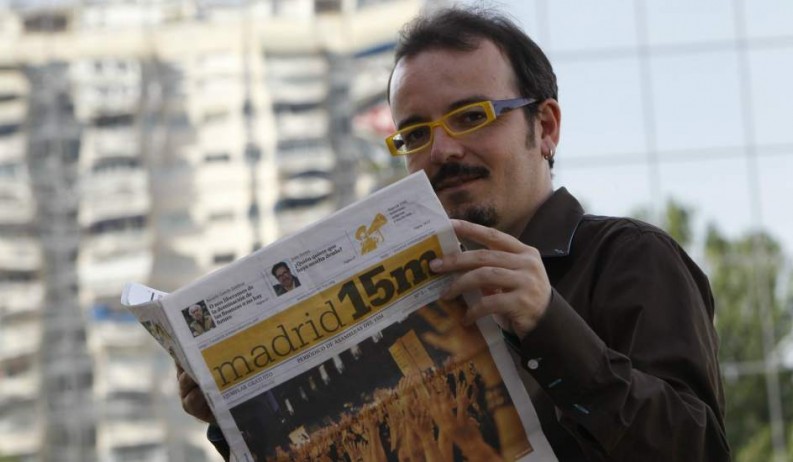 MADRID: A Book Isn’t a Book, Isn’t a Book, Isn’t a Book…at least it’s what Bernardo Gutiérrez, author of the book #24H, tells his future readers from his blog at the online Spanish paper 20 Minutos. Launched May 14 by dpr-barcelona, #24H was born a year ago as an offline blog during the Spanish Spring 2011, a movement also known as “los indignados,” the Spanish equivalent of Occupy Wall Street. The book recreates life on a planet called Internet during the 24 hours prior to the massive protests in the Plaza del Sol in Madrid. But this isn’t another blog-to-book experience. Bernardo Gutiérrez is rightly aware that blogs don’t fare well when they’re stripped of their links and frozen in a container. Thus #24H, whose title recalls a Twitter hashtag, can be edited by any registered user on the open platform booki. Gutiérrez, who describes himself as the book’s “nigh-author,” says that if the print book belongs to the order of architecture, his experiment is a deconstructible building. “Any reader can disrupt the book. You can read it from beginning to end. Or sideways. Or you can obliterate parts of it. You can print whatever chapter or fragment you want thanks to a tagging system. A book is as many books as it has readers,” he says, maybe unaware of the fact that he’s citing a Western tradition that goes back at least to Rome.

Gutiérrez concedes that there’s some trickery involved in the linear reconstruction of time needed to tell the story of those hours that preceded the first Spanish protests against the euro crisis as it developed itself on the Internet. “Time is fragmented, it has no territory, it’s convex and it’s concave. A day on YouTube has 50,400 hours of video,” he says and immediately adds with a flourish of baroque excess, “2,100 days fit into one day; 70 months in one hour.” The book has links, echoes, tweets in flux, exits, tunnels, readers that hole up in parallel chats. “Trickery,” he sums up.

Aside from the Creative Commons license that frees the content for readers’ active participation, #24H needed an authoring and publishing tool that made collaboration easier. They chose BookType, launched in beta last February at the O’Reilly Tools of Change conference in New York. BookType is also pivotal to another challenge the author presented to his publisher. He calls them “occupy platforms,” which in the trade jargon means tools for a multi-channel strategy. “#24H is about a movement that occupied the public space to express their discontent, therefore the book must occupy all the possible platforms,” says Gutiérrez. #24H is available for reading (and remixing) online, as a downloadable pdf that you pay for with a tweet, as a remix for print on demand through Lulu and Bubok or at the Kindle Store or as a DRM-free epub that you can read on any device that supports the format.

It was not easy for Gutiérrez to find a publisher for this adventure into the unknown. The architects of dpr-barcelona, a posh start-up that mainly publishes books on architecture and the visual arts, dared to provide the necessary tools.