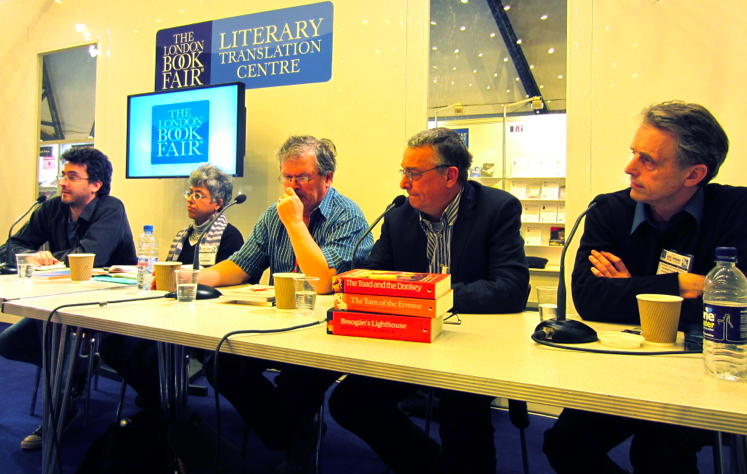 At the Translating Minority Languages event during the London Book Fair 2012, the four speakers — Christopher Meredith, Gabriel Rosenstock, Clive Boutle, Sampurna Chattarji and the chair, Daniel Hahn of the British Centre for Literary Translation — were a lively bunch with humor, poetry and much to say between them. The event had a slightly zany feel to it given that the languages the participants represented were restricted to the British Isles and to Bengali, which is spoken by 85 million people in India alone — hardly a minority language.

That said, Christopher Meredith, a writer and translator of Welsh said he felt that the situation in Wales was a microcosm of the way languages co-exist in the world. Of 3.5 million people in Wales, there are only 5-600,000 Welsh speakers—this gives one an insight into the relationship of a big language living next door to a small one; said Meredith.

Clive Boutle, of Francis Boutle Publishers specializes in books translated from minority languages in Europe, and is the foremost publisher of Cornish. Recent anthologies include Galician, Breton and Norman (from the Channel Islands) literature, he also publishes books in Manx, spoken on the Isle of Man. Most translations from these languages are possible as in the case of Cornish and Manx, because he knows exactly who his audience is, or thanks to European government support, although Boutle said he didn’t quite understand Europe’s business model when it comes to translations of lengthy novels. France represents a “hole in the middle of Europe,” he added, because it does not recognize minority languages.

Gabriel Rosenstock is a poet who translates back and forth between English and Irish; he has translated poetry into Irish using English as a bridge language. He raised the point that translations into smaller languages are essential to ensure that these language cultures don’t become too inward looking and narrow their vision. The life of a literary language, said Rosenstock, depends a lot on inward and outward translations.

Sampurna Chattarji, a writer, poet and translator said she fell into translation by chance, when she retranslated Sukumar Ray’s “Gibberish” for children. She now translates many languages such as Irish or Swiss German into Bengali using English as a bridge language, which she doesn’t see as a problem as long as one is very conscientious and can ideally work with closely with the author. She believes that if there is a translation problem with a bridge language, it can be fixed. “The essential component is dialogue, being picky and going back and forth. Of course if the author is dead you have to rely on your good conscience,” said Chattarji.

Meredith has both translated using English as a bridge language from Greek into Welsh, for example, but also spoke about the experience of having his own writing translated. He said that bridge translation seems counterintuitive, but that with the right care and attentiveness, there’s no reason why it shouldn’t work. Speaking as an author, he said, you have to relinquish something of your work. “It goes out there and leads its own life…strange things will happen to your texts.”