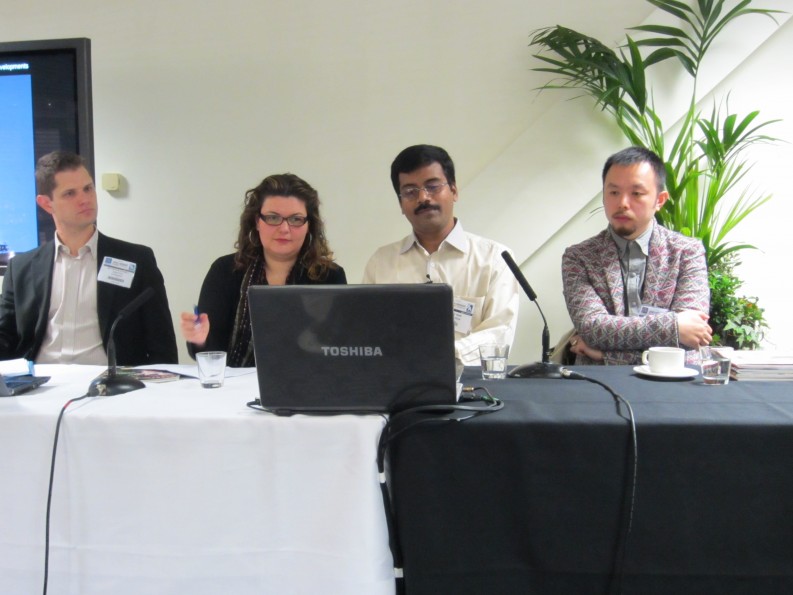 All have similar problems with how to cater to a large, young population, although each country has its specificities. In South Africa, Attwell described the problem of accessibility to books in rural areas. His Capetown-based company, Paperight, has brokered a deal between copy shops and publishers in order to diminish the illegal photocopying that is a constant problem for publishers. Attwell has set up a system whereby copy shops can legally print books by paying a fee; publishers (and Paperight) earn revenue from the copy shops. Attwell also spoke about open license textbooks that can be downloaded for free and illustrated as an example the success of the Siyavula company, which partnered with the South African government to provide grade 10 mathematics and science books for schools.

Developing books for mobile phones is also a growing trend, something that Ganesh Ram, who founded eMahatva Technologie is grappling with making Indian languages available on mobile phones, leading to accessibility to e-books. With his company Fublish, part of eMahatva, he intends to tap into a market of 900 million mobile phone users who have access to the Internet but have not necessarily ever used a computer. In a country that has 21 official languages, only 5% of these phones have native language capability. Ram is developing language technology and has started to store open domain books on memory cards that can be delivered to users.

As part of the marketing team at Istanbul publisher Dogan Kitap, Gökçesu Tamer says piracy and distribution are two problems that stand out in Turkey. In order to distribute in the eastern area of Anatolia, a company called Prefix provides online distribution to bookshops providing a model for more rural areas. Bookshops can order online the books they need and are hooked up to a banking system. Another area that is developing rapidly — up 400% last year — is the e-book market. Kitapyum is a new platform that is producing applications that will be compatible with a variety of devices; a B2B model that has been developed is a Samsung e-book application for Samsung Turkey.

Tamer’s company is betting on an efficient use of social media to interact with young readers to find out what they want to read. Dex Kitap is an imprint for young adult books that focuses on fantasy, mystery, horror and love. Young people in Turkey need to belong to a community, said Tamer, and books can be considered cool, people want to share their stories. Dex Kitab works on talking to young adults online before publishing their books.

Jason Ren runs a magazine called Little Thing in China, testing a new business model in the industry. Like Tamer, Little Thing provides a community for its customers with a high-quality lifestyle magazine, but also concept shops with designer products and online shopping. Ren uses online gateways and provides apps for iPhone and Android. Atwell and Tamer use EPUB and PDF formats, while Ram uses Java applications for e-books but said standards are changing rapidly.

Attwell’s bridge between copy shops and publishers was extremely interesting to the others, while certain forms of payment now possible in India, such as pre-paid cards or companies specialized in handling payments are needed in South Africa, said Attwell. All agreed with a Chinese proverb quoted by Ram: “Give a man a fish and you feed him for a day. Teach a man to fish and you feed him for a lifetime.”