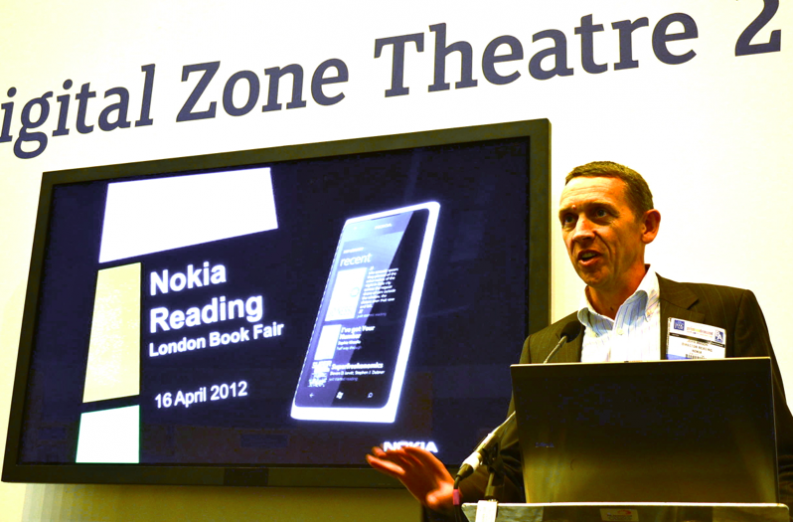 It’s not all about the iPhone. Nokia is at the LBF (unlike Apple?), talking up its Nokia Reading initiative, which is due to go live in the UK, Germany, Spain, Italy, France and Russia next month, with other markets to follow.

John Mason, Head of Nokia Reading, is evangelical about the power of mobile to bring reading to communities that have not had access to print, notably Africa and rural China. He noted that the one-child policy in China means that many children have six adults (two parents, four grandparents) all looking out for the educational welfare of their children and grandchildren. “Culturally, reading is very important there. Right now you have around 100 million people reading digitally on very basic phones. Because of the growth of mobile, they’ve leapfrogged from not much access to a whole new digital world.”

Nokia is now in more than 170 territories and sold some 450 million devices last year, many in emerging markets. “Something we often hear is ‘but will people read on their phones?’ But of course, we are all already doing an enormous amount of reading on our phones. And people find reading something longer is better than they expect. People also prefer to read mobiles when they commute because they don’t have the worry of dropping an expensive e-reader.”

Nokia Reading is a touch and color e-reading hub that will combine news, audio and e-books in one place, “with great local content”, Mason says. Several hundred thousand e-books will be available, depending on the market. Pricing models will include agency and wholesale depending on individual territories and publishers. Nokia clearly has plans for the future, too. “We’re looking to enhance the reading experience,” Mason says. “A mobile doesn’t just know who you are, but where you are – context is something we need to make more relevant.”