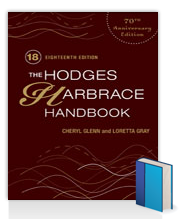 Think of the word grammatical. What’s the next word that comes to mind? If you’re like most people, it’s either errors or rules. The word grammar itself doesn’t fare much better. Its common definition appears to be “a set of rules for avoiding errors in speech and writing,” and the repository of these rules is the grammar book or writing handbook (or in some cases the grammar checker). This view of grammar is based on the prescriptivism belief that right ways and wrong ways to order sentence parts are easily discernible.

Considering language as a standard set of dos and don’ts makes sense to a certain degree. Standardized English is the language of participation and power, so to speak and write well, we need a user’s manual that consists of both words and descriptions of their customary order. However, teaching proper grammar, focusing only on those rules that help students avoid fragments and fused sentences, has its limitations. Students typically encounter writer’s block when they expend too much mental energy focusing on form. Afraid to make a mistake, they write short sentences, often at the expense of developing their ideas. Teaching grammar rules as commandments takes the fun out of working with the language.

The Hodges Harbrace Handbook, first published by John C. Hodges just over seventy years ago and now in its eighteenth edition, takes a nuanced view of proper grammar. It asks students to learn not only what is deemed correct but also what is considered appropriate for a particular purpose and audience. (After all, proper and appropriate have the same Latin root.) Instead of just referring to rules, the book mentions conventions, asking students to think of the expectations held by their readers. Thus the students’ guiding question is not What is right? but What is appropriate in this situation?

With its emphasis on rhetoric, the art of using language purposefully, Hodges invites students to think strategically about grammar, to understand what Francis Christensen meant when he wrote, “Grammar maps out the possible; rhetoric narrows the possible down to the desirable or effective.” Whether deciding between the active and passive voice or considering a dash instead of a comma or colon, students are asked to compare the effects of different possibilities. Sometimes they are even encouraged to break a traditional rule to stress a point or add a humorous touch. For example, students are generally advised to place their most important ideas at the end of a sentence. The Hodges presents an entertaining counter-example by Woody Allen:

Contemporary man, of course, has no such peace of mind. He finds himself in the midst of a crisis of faith. He is what we fashionably call “alienated.” He has seen the ravages of war, he has known natural catastrophes, he has been to singles bars.

Rhetorical grammar is by no means an expression of new-fangled ideas. John Walker wrote A Rhetorical Grammar in 1823. What is new is its incorporation into writing handbooks. Hodges has attempted to set the bar a little higher for writers of these books, urging that we all move beyond listing the top twenty student errors.  Perhaps it won’t be long until people think of choices when they hear the word grammatical.

SURVEY: Is it Web or web, Internet or internet, eBook or E-book