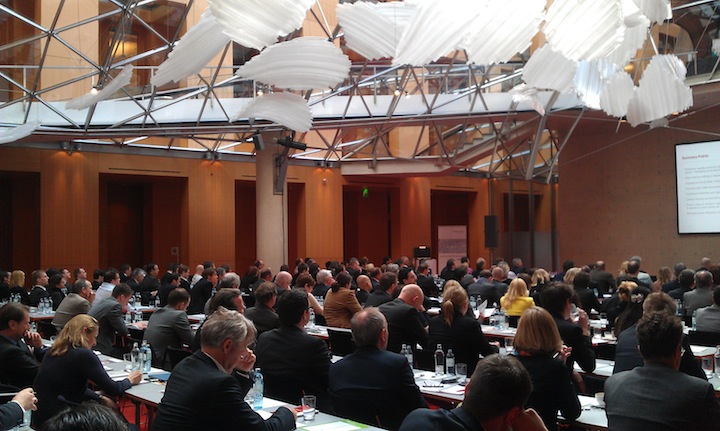 BERLIN: “Reading is optional; buying is more important.” German journalist Kathrin Passig’s tongue-in-cheek comment raised a laugh among the more than 300 attendees of Klopotek’s 9th annual Publishers’ Forum, which was held on April 23rd and 24th in Berlin. In her talk “The Million Dollar Question,” she discussed customer expectations of online bookstores. How can booksellers steer readers toward the right book for them when there is already such an abundance of information out there, from reading samples to recommendations on social networks? Selling a book also means having the right recommendation algorithm. She along with an international cast of speakers set out to explain how context can enhance content and why it is vital to digital discoverability. The grand entrance to Frank Gehry’s inspired axica conference and convention center located just across from the Brandenburg Gate set just the right tone for the event. Keynotes and workshops in German and English focused on everything from new discovery tools and formats to change management and metadata.

The book is an object, but publishers need to start thinking context-content-container. With this thesis, Brian O’Leary of Magellan Media kicked off day one of the event. Echoing the theme of this year’s event — “Context enhances content — context provides the business framework” — O’Leary warned that stripping content of its context and focusing on the container it comes in limits how audiences find content. But publishing workflows often still focus on container first. Honing in on context, on the other hand, is the key to entering new strategic territory. This context is provided by intermediaries like booksellers, librarians and reviewers in the physical world. “To compete digitally, we must start with context and preserve its connection to content so that both discovery and utility are enhanced,” O’Leary noted in a related blog post.

Does the term “enriched e-book” neglect the richness of printed books? Talks focused on specific publishers’ responses to the needs of the digital age rounded out the program. Dr. Uwe Naumann and Robert Galitz of Rowohlt, for example, took the stage to discuss their “Digitalbuch Plus” program for creating enhanced e-books using historical documents, personal stories from authors, recordings of reading events and more — a contemporary form of reading, added Naumann.

How should enriched e-books be categorized when they are often a combination of book, audiobook and film? This problem of perception often means that enriched e-books are ignored by the press and reviewers. And speaking from his background in trade publishing, Naumann asked whether the term “enriched e-book” shouldn’t in fact be changed in that it assumes a certain lack of richness among print books.

Though the pair discussed several specific projects, including a biography of Albert Einstein featuring a speech he gave in 1931 and the Italian children’s book series Geronimo Stilton, which is scheduled to launch in German this summer with game elements, time and cost restraints have limited Rowohlt’s enriched e-book line to just 12 titles (compared to its 1051 “regular” e-books). The cost and complexity of clearing rights — particularly film rights — means employees have to be creative about finding content. And in order to be more actively involved in tracking down content, both in-house and through domestic and international partners, publishing staffers need to develop a dramatically new skill set, according to Naumann.

Digital textbooks and an e-book library

It seems that learning and lending are slowly making the shift online in Germany if you listen to Christina Hauck of Cornelsen and Christian Damke of Skoobe.

In her talk on digital textbooks, Hauck, who is responsible for new business development for Cornelsen, suggested that the term “book” might ultimately become a metaphor for something like a digital learning system.

Though many schools still don’t have the technical capability to deal with widespread use of digital textbooks, Hauck is thinking about the future. New teachers grew up with technology, and their students are digital natives. Escuela 2.0 aims at changing the way students learn in Spain and South Korea plans to completely do away with printed textbooks by 2015. In Germany, all eyes are on www.digitale-schulbücher.de, an open solution for downloading and reading textbooks that is set to launch at the start of the school year 2012/2013. The project was developed by the Verband Bildungsmedien (educational media association) and 27 publishers have signed on thus far. Codes will be be provided to purchasers and ultimately students for a single activation of the book and students will be able to highlight and take notes in the books, which can be read on any device.

And for children and adults alike who’d like to visit the library at the push of a button, Skoobe, the much talked about mobile library project conceived by Holtzbrinck, Verlagsgruppe Random House and arvato is now open for business with nearly 9,000 trade titles from over 70 publishers. According to CEO Christian Damke, Skoobe is now one of the 10 most downloaded e-book apps in the German App Store (and will soon be available in the Android Market). For now, the first 10,000 users can borrow any number of books for €9.99 per month, but come February 2013, that number will be limited to two a month. With smartphones expected to outnumber people by the end of this year, and with people spending less and less of their time making phone calls on their phones and more time surfing on them, Damke says the key is to focus on how much of this time people dedicate to reading.

DISCUSS: Will the DOJ Lawsuit Slow US Publishing Innovation?