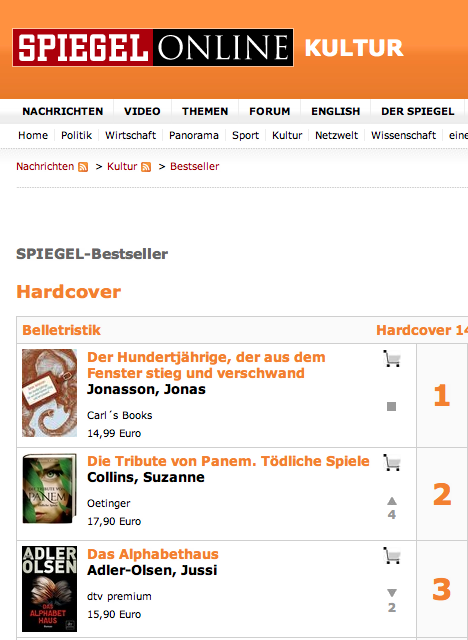 “Media Control does not unveil which stores deliver the data, but is saying that ‘five big e-book retailers’ are the source,” said Roesler-Graichen, adding that since some publishers also deliver sales data, it is likely that they also contain sales made via Amazon.de. And Media Control has plans to collect more detailed data from e-book retailers over time.

The Börsenblatt will be one of the publications featuring these lists on a monthly basis with a delay of about 6 weeks (i.e. the first list published March 22 shows the January 2012 figures). The reason is simple: “Because we have a market, even though it is small,” said Roesler-Graichen. The lists will also be published as the Spiegel Online e-book bestseller lists, and in issues of buchreport, the publisher of which is a subsidiary of Der Spiegel.

E-books still represent a fairly small percentage of the book market in Germany – just 5.4% of publishers’ revenues based on a questionnaire answered by 437 publishing professionals in January 2011 and published in the study The Global eBook Market: Current Conditions & Future Projections. But what are some of the issues holding German consumers back?

According to Roesler-Graichen, the biggest problems are finding the right device, the lack of convenience with regards to DRM and installation procedures, pricing (too narrow of a gap between print and e-book price) and the lack of standardized processes. In terms of pricing, one of the biggest concerns is the discrepancy between the VAT customers pay for printed books (7%) vs. e-books (19%). But one bright point is that the availability of titles has been increasing. Roesler-Graichen notes that consumers can now find 80-90% of print bestsellers in e-book format.

What is this small but growing German e-book community reading? The debut fiction list features plenty of crime novels – three in the top five alone, led by Charlotte Link’s Der Beobachter. The German editions of Patricia Cornwell’s Unnatural Exposure and Christopher Paolini’s Inheritance and Eragon rounded out the top 10.

There were some other big events in the past year that bode well for the German e-book market. The three biggest turning points in Roesler-Graichen’s opinion were the market entrance of the German-language Kindle 4 in Germany; readers with integrated e-book stores from Libri, KNV, Thalia; and the inexpensive Weltbild eBook Reader, which is now selling for €59.99 on the Weltbild website.