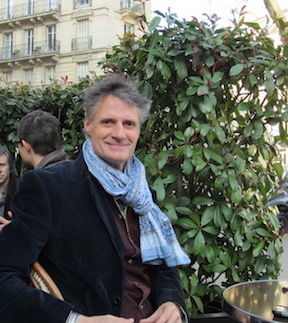 Marc Parent is all smiles

PARIS: A new, Paris-based international literary agency, yet to be named, is about to launch with a branch in New York and plans for one in New Delhi. Marc Parent, one of the partners, recently left French publisher Buchet-Chastel, where he had been editorial director for foreign literature for almost ten years. He has teamed up with Polish-born Anna Jarota, who came to Paris after working with London agent Andrew Nurnberg. They will be joined by a New York literary agent (whose name has not been made public), which will give the agency its American office. Parent also hopes to open an office in New Delhi by the end of the year.

At Buchet-Chastel, Parent published authors in translation such as Aravind Adiga, Kamila Shamsie, Ron Hansen, and Amy Tan. He had come from HarperCollins and Taschen, and during his tenure rebuilt Buchet-Chastel’s long-neglected foreign literature list, famous in the past for publishing Malcolm Lowry, Henry Miller and Lawrence Durrell.

But of late, Parent had been feeling cramped in his role.

“I’ve always had a sense of camaraderie with my authors,” said Parent. “I was interested in their texts but I also liked to give them a chance in the international world, I always dealt with promotion in a very Anglo-Saxon way, so in a sense, I was already working like an agent.”

At a time when there are still relatively few agents in France and most publishers handle their authors, Parent says his move to become an agent is seen as akin to treachery.

“Publishers here don’t promote authors the way they should, they think they’re taking care of them but at the end of the day only a small percentage of authors can live from their writing. Now is a time when authors most need an agent, with e-books and so forth…”

A study on the relationship between French authors and their publishers released last month revealed that more authors are dissatisfied (31%) with their publishers than the previous year (22%), and that this dissatisfaction grows once the promotional and commercial work on a book begins.

Parent met Jarota, who has been working as a co-agent for the past three years, by buying rights from her when he was an editor. She is, he said, his “favorite foreigner in France.”

It’s easy to understand why Parent wants to operate globally. His mother was an American model, who moved to France. He was greatly influenced by his maternal grandmother, who was a devout follower of Sri Ramakrishna, and he can transition seamlessly between French, English, Italian, does fine in Spanish and is learning Hindi. He has a particular interest in literature from India and Pakistan—it made up 25% of his list at Buchet-Chastel—and is a fixture at the Jaipur Litfest.

He is also impatient with the French publishing milieu, which he says is insular and produces too many “autobiographical novels for a small circle that does not include the rest of the world.”

“I’m 54 years old so now’s the time for me to go further by starting a worldwide agency and selling to publishers worldwide,” said Parent, who has taken a number of his Buchet-Chastel authors with him, such as the Americans Mary Relindes Ellis (world rights) and Ron Hansen (European rights), Indian writer Gurcharan Das and French novelist Isabelle Jarry.

Opportunities are everywhere and Parent feels that with a foot in Europe and one in the US he can offer authors a global outlook. “US agents don’t always grasp the potential that the rest of the world can offer an author either.”

In the end, he feels his transition from a publishing house to an agency is natural: