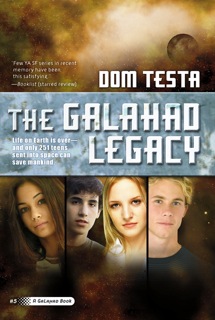 “You can spend billions of dollars on programs, but if the students aren’t receptive to the message, your money is wasted. It’s crucial to help young people recognize that smart is cool.”

Dom Testa is the author of the best-selling Galahad series, whose concluding volume, The Galahad Legacy, was published by Macmillan’s Tor/Forge in February. He’s also a writer who uses the platform his books have given him to spread a simple and important message: being smart is cool.

Testa has had a long-standing interest in young people and education. Visiting schools, he noticed the smart-isn’t-cool attitude is, in his view, much more prevalent than people realize. “Kids are dumbing themselves down to fit pop-cultural notions of what’s cool — in books, TV, movies, anyone with half a brain is portrayed as kind some kind of geek. And so the kids are throwing away their futures for the sake of fitting in.” Even the Galahad series plays directly into Testa’s concern. The six volume series, a YA dystopian tale of 251 teens chosen from around the world to create a colony on a distant planet after a virus devastates Earth’s adult population, poses questions of survival and the future of mankind that keeps teens reading. But for Testa, the question posed was a simple one: “What happens when sharp kids are put to the test in a difficult situation? How will they respond?”

Both readers and critics have embraced Galahad, but one of the most gratifying aspects of the series’ success is the way that the books are being used in schools across the nation. In Amarillo, for example, students in English classes read the books, students in art classes created large murals featuring the book’s landscapes and characters and students in the science department designed and built 100 rockets, all of which were fired off en masse.

The Amarillo experience has been turned into a program that teachers nationwide can download from the Big Brain Club, along with 3–4 page lesson plans that delve deeper into the scientific issues raised by the books. Testa even uses his radio program, the leading morning show in Denver, to promote literacy and education with his weekly “News for Nerds,” featuring three to five of the most interesting science stories of the week which are then also posted on his blog. For Testa, his books, his radio show, his blog, and the Big Brain Club are all part of the same picture:  driving home the message that education is important, that you can use your brain AND still fit in at school, and that being smart and being cool are not mutually exclusive. “I’m convinced that the key to improving the state of education doesn’t lie with Washington, or with state governments, or even local school boards. It lies firmly within the attitudes of the students themselves. You can spend billions of dollars on programs, but if the students aren’t receptive to the message, your money is wasted. It’s crucial to help young people recognize that smart is cool.”