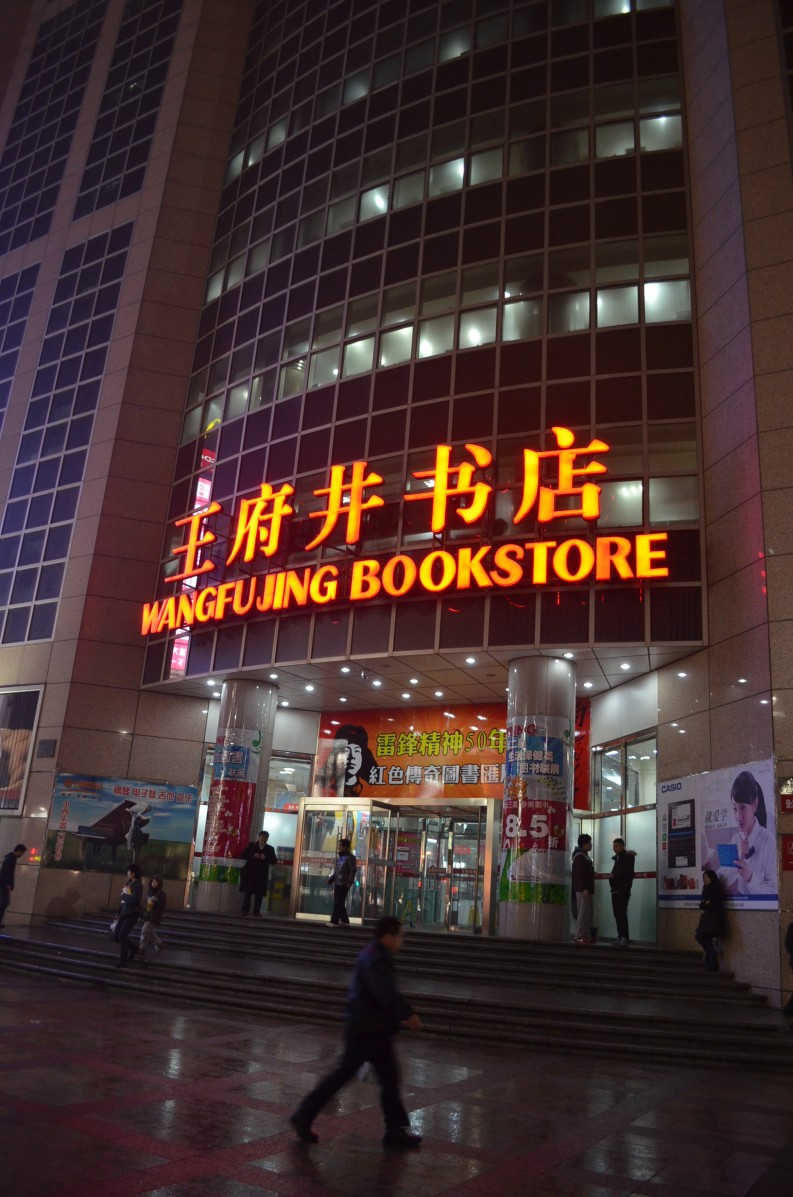 “I write as freely as I want, but I give my publishers the freedom to cut anything they want. I’ve made my deal with the world.”

In China there is a great emphasis on the three Rs – that’s not Restrictions, Restrictions and Restrictions, as so many assume, but the government’s enormous Rural Reading Room project, an ambitious initiative that aims to put a “reading room” – effectively a library – in every one of the nation’s 630,000 villages. Some 500,000 have been completed so far and when the project is finished, the investment from the Chinese government will be around 18.5 billion yuan (approximately $2.9 billion). This scheme, proudly presented by Wu Shulin, Vice Minister of China’s General Administration of Press and Publication (GAPP), the government body that runs all media in the country, was among a welter of ideas and information absorbed by the UK media during last month’s fact-finding mission to the country organized by the British Council, in conjunction with PR firms FMcM and Midas to tie in with China’s position as Market Focus at this month’s London Book Fair. Like most of my fellow journalists, I had never been to China before and the packed, three-city program was full of revelations.

“China is still a developing country and 800 million people are still living in rural areas,” said Shulin. “How to ensure their access to books is an important issue. Central and local governments have spent a lot of money to help farmers gain access to books. The Reading Rooms in small villages have 1,500 books and 100 periodicals and newspapers, but in some of the larger ones, the Reading Rooms can have as many as 50,000 books. We are spending a lot of time and energy on citizens’ rights to know and to read.”

Of course, cynics will say that this project is only about indoctrinating the people to become true Party followers, or some such. It’s interesting to observe how the default setting of many in the West is to criticize China whatever it does – unless, that is, you’re the MD of Cartier, Dior, Burberry, or any one of a number of blue-chip brands, in which case you’re there with your tongue hanging out, positively gagging for those yuan.

The Westernization of parts of Shanghai, Nanjing and Beijing is striking. There seem to be more familiar brand names here than at home. China must be the most capitalist Communist country on the planet, with Beijing’s many vertical shopping malls both familiar and unfamiliar. One kept expecting to see a Waterstones or a Foyles (these places are very like London’s two Westfield malls) or even a Barnes & Noble.

Bookstores Unlike Any Other My visit to the large Wang Fujing bookstore, part of the huge government-owned Xinhua chain, was a personal highlight. This store is close to Tiananmen Square and saw the tanks rumbling past in 1989. Framed portraits of Chairman Mao and fellow leaders Zhou Enlai, Deng Xiaoping and Sun Zhong Shan greet customers, while below them, rather incongruously, sits a large bay of Dale Carnegie titles. The section headings are something to behold: “State Leaders’ Works,” “Theories and Works of Marx, Engels and Lenin,” “Communist Party History and Development,” and a huge display of titles associated with Lei Feng, a loyal Maoist soldier, little known in the West, who died as a young man and is hailed as model citizen. “All these books are called ‘red classics,’” the extraordinarily helpful Meijing He from the British Council in Beijing said. “Some state-owned companies will buy the titles for the staff to read.”

In this large store, the fiction department – both Chinese and foreign literature in translation – was on the top floor, acting one presumes, much as a restaurant does in a department store: as a draw to lure customers right into the shop. Here were some 20 bays marked “Foreign Detective Novels,” with the country of origin marked on the spine, as well a huge calligraphy section, including brushes and paper – a reminder of China’s long, noble tradition of calligraphic poetry.

No Writing is Completely Without Restraints

In a packed itinerary, we met with writers, editors, book and magazine publishers, as well as with the board of GAPP itself.  The latter was a significant meeting since such journalist briefings are rare. LBF Director Alistair Burtenshaw was in the group as well, to further underline the importance of this month’s market focus, which is easily the largest in the scheme’s history.

At our very first meeting with writers, in Shanghai, both sides (forgive the Cold War language) were a little nervous. Could we mention Tiananmen Square? How free were the writers to say what they liked? Some of the answers were fascinating.

“It is better to write without freedom than to write with freedom,” said the novelist and university professor Xiao Bai. Metaphorically – and the Chinese are adapt at such concepts – we leapt on him to explain. “If there are restraints you will feel the urge to break these restraints, but we don’t want the role of the [political] Opposition. Writers should observe human politics from their personal, individual perspective.”

His fellow novelist Sun Ganlu, Director of the Shanghai Writers Association, added: “I believe it’s an obligation for all of us to raise our opinions about the public policies, but writers have different ways of doing this. No writing is completely free, completely without restrains – you are restrained either by your gender, race, the time, or in the writing style. So maybe politics is just one kind of restraint.”

On Tiananmen, the view was that this was a moment in history, and that any current limitations will become part of history, too. The novelist Fang Teng – who is among authors coming to LBF – said “I write as freely as I want, but I give my publishers the freedom to cut anything they want. I’ve made my deal with the world.”

Literary Magazines and the 2666 Library Li Er: "The future of China's literature is in the magazines."

The health of literary magazines was striking, with Chutzpah (because that’s what it took to launch it) selling 30,000 each issue, according to Editor-in-Chief Ou Ning. He will join a panel discussion on literary magazines at the book fair and hopes to meet a UK distributor for his magazine. Much new writing, including novels, initially appears in a kaleidoscope of literary journals – People’s Literature, Pathlight, Harvest – and may then become a book later. Publishing in this format first is seen as less commercially risky and also prepares the market for the book. The short story writer Li Er, also coming to London, put it simply: “The future of China’s literature is in the magazines.”

Rather than being taken to the enormous Shanghai Library, we followed guides down a narrow hutong (alleyway) to the tiny 2666 Library, which must be one of the most tucked away in the world. Established a year ago by five journalists as a community resource for local residents, the library takes its name from the novel 2666 by the Chilean author Roberto Bolano. One of the founders, Shi Jian Feng, said: “We’re different from other libraries – small and cosy. We have around 3,000 books, with some authors donating books to us, some of which are signed which we have for sale. We have different events every week and had around 20 or 30 author visits last year, including Janette Winterson. Sometimes we stay open until 1 a.m. – very often it’s the users who help us close the doors.”

As an introduction to the Chinese book industry the trip could not have been better. It showed an industry – like the country itself – in a process of transition, from being state-run to becoming a state/private hybrid. Bookshops in some provinces receive state aid, a fact that must interest the trade associations in the West, and the continuing existence of bricks and mortar is clearly valued by the government. Writers seem free to write what they want, even if at times they cannot always publish what they want. Criticism of the government comes out via the Net or weibo, the Chinese Twitter, which is hard to police.

Burtenshaw returned to oversee last minute details on this month’s extensive Chinese program, which he sums up like this: “As befits the largest publishing market by volume, and the size of the country, the China Market Focus program will be the most extensive we have run. Their pavilion covers more than 2,100 square meters in which more than 180 Chinese publishing companies will be exhibiting. In addition, many Chinese companies will be exhibiting independently. The scale of the pavilion, the programme and the number of Chinese visitors should provide a fantastic opportunity for international publishers to network and build their contacts and their knowledge of the Chinese publishing industry.”

Certainly I will be dropping by to say Ni hao to new friends and contacts and to hear more of a fascinating, unfolding story.