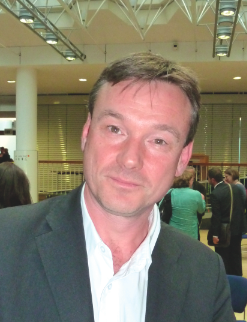 British publishers arrive at Earls Court today as the industry has to redefine exactly what it means by the word “book,” according to Faber Chief Executive Stephen Page. “There are so many blurred boundaries now, with audio and moving image, with gamification elements: it means what we mean by the word book is changing. And when you have blurred boundaries, it also means you have opportunities, so I’m optimistic.” The UK industry has just recorded its third consecutive year of falling revenues, according to Bowker Market Research UK. Consumers spent £2,137 million on books in 2011, a drop from £2,179 million in 2010 and 9% lower than the £2,341 million spent in 2008. However, the total number of books sold – including e-books – increased from 339 million to 344 million, although that figure only equals the number sold in 2008.

Hachette CEO Tim Hely Hutchinson said its own increase in digital sales had made up for softness elsewhere. However, it is this increase in e-books sales, and its implications, that is most occupying his mind. “For years we talked about digital coming – well, it is upon us now, and the huge increase in sales we’ve seen is inevitably going to put a squeeze on print booksellers. I want to get out and hear what they’ve got to say about their position on digital.” Profile’s Andrew Franklin was upbeat. “I think people are more cheerful. I think we can see a way through our difficulties, and there are some quite interesting books around.”

A publisher who didn’t want to be named was encouraged by a sense that “public opinion is turning against Amazon. It has certainly started in the US where various companies have refused to deal with them because their discounts are too high.”

The financial crisis is inevitably having an effect in parts of Europe, according to scout Anne-Louise Fisher. “The French are concerned, the Italians are down 10% and Spain is certainly down. But Germany is holding up reasonably well and Scandinavia is fine. Digital hasn’t really happened in Europe yet, because the devices aren’t there, though Kindle launches in Italy this month – and the Italians love gadgets.”

There are deals still be had for the right properties – witness the great sweep of deals across Europe for E L James’ Fifty Shades erotica trilogy. Germany, Sweden, Finland, Norway, Denmark, Holland, Hungary, Spain and Greece have all signed, with more expected at the fair.

Among agents, Peter Straus of RCW, who took over from Anthony Goff as President of the Association of Authors Agents earlier this year, sounded distinctly upbeat. “I think it’s a vibrant market out there. We’ve seen quite a few deals being struck in recent weeks, many of them for debuts, and I think the green shoots are definitely coming back. Publishers seem more confident and excited. It’s such a changing dynamic in the way books are published and sold now, and there are all these devices out there which means it’s becoming sexy to read — particularly if it’s Fifty Shades of Grey.”

Page’s other concern at the moment centres on skills. “The transformation of skills that all publishers need for it to embrace its future. The book is proliferating in all sorts of ways and we need people who are sharp and quick in those areas, as well as people who are empathetic to what writers are trying to achieve and who can communicate it well.”