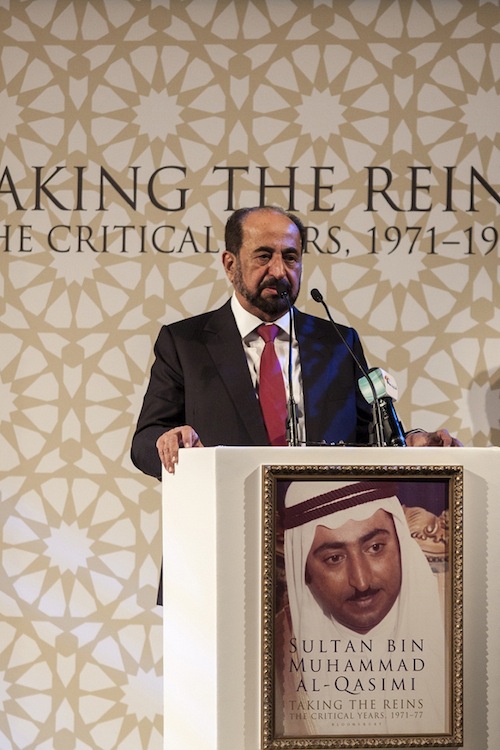 There’s nothing quite like a Sharjah ruler’s book launch other than a… Sharjah ruler’s book launch. Thursday night saw Bloomsbury UK’s dinner in London to celebrate publication of Taking the Reins, the second volume of memoirs from Sharjah ruler Shaikh Sultan Bin Mulhammad Al Qasimi. The first volume was launched at the British Library; this time it was the Natural History Museum, whose entrance was lit by flaming torches and on whose famous brickwork the flag of Sharjah was beamed by revolving spotlights.  It seems the publisher tries to go one better every time – and succeeds.

Bloomsbury CEO Nigel Newton, who must be quietly relieved he doesn’t have any Department of Justice nonsense to deal with (though His Highness could doubtless cover the court costs) praised the book saying it was the perfect way “to understand a great ruler and the birth of a new nation, one that the world increasingly turns to for leadership”.

The BBC’s Gavin Esler gave the keynote address, retelling the story of time Shaikh Sultan’s father drove General Lucius Clay — who later became Deputy to Eisenhower – into the water in an amphibious vehicle. “There was a small boy in the vehicle who was sick all over the General. Years later, Shaikh Sultan met General Clay and asked him if he remembered the incident. He said he did. The Shaikh then said: ‘That little boy is sitting before you now.’”

The book has some choice descriptions. Here’s the Shaikh visiting oil execs in Houston. ‘To a man, they were tall with broad shoulders and hands as huge as a camel’s foot.

Guests amid the imported palms and star-flecked drapes at the museum included literature in translation doyen Christopher MacLehose, the British Council’s Director of Literature Susie Nicklin and London Book Fair Director Alistair Burtenshaw.  There was also a – hmmm, what’s the collective noun? – a wealth of ambassadors from Arab countries, including Jordan, Oman and Kuwait.

The next volume of his memoirs will be called Under the Banner of Occupation, the Shaikh said.  “It will deal with 150 years of British occupation of the coastal states…But we are all friends now.”