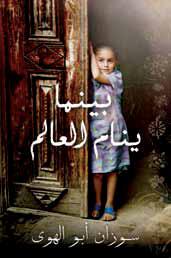 “The Palestinian narrative was in Arabic. It was unappealing, and it didn’t reach the West in those early years.”

Sometimes there are heart-warming stories in the publishing world about books that are granted a second life. Susan Abulhawa’s Mornings in Jenin, just out in Arabic, is one such story. Abulhawa, a Palestinian who lives in the United States and works as a scientist published her first novel in 2006 entitled The Scar of David. The small publishing house, which was soon to go out of business, made contact with a French editor, Marc Parent, who bought the rights and brought out the novel in translation with a new name: Mornings in Jenin. He also believed the book had great potential and put Abulhawa in touch with the prominent European agent Anna Soler-Pont. From there on, the book took off, becoming an international bestseller, translated into 23 languages. Bloomsbury reedited the book in English in 2010, and Bloomsbury Qatar has just launched the book in Arabic. Film rights have been sold to Film Works Dubai.

Mornings in Jenin is the powerful, gut-wrenching tale of the Abulheja family that takes them from the olive harvest in their village in Palestine through the first terrible violence of the Nakba and into the present, with the struggles, irreparable losses but also tremendous love that the family experiences.

The novel has “…everything in it. One can sense that it is a book inspired by someone’s life. It’s an individual story and a collective story grounded in history,” said Marc Parent. Out now in Arabic from Bloomsbury Qatar

Abulhawa was born in Kuwait, lived in the Dar al Tifli orphanage (immortalized in Julian Schnabel’s film Miral) in Jerusalem for three years before moving to the US at age 13.

“I did not grow up around my parents very much,” said Susan Abulhawa in an email interview this month. “In the US, I lived in the foster care system. My childhood was quite unstable and unrooted, owing mostly to family circumstances. I have mostly felt my way through life…”

This rootlessness comes across in Amal, the main character in Mornings in Jenin, who is a gifted student and earns a scholarship to study in the US. Her raw loneliness and seeming aloofness, a result of the emotional trauma she has been through, is described with such intensity that is seems impossible that Amal is not Susan Abulhawa. And yet, as with so many gifted storytellers, Abulhawa says there is only “some of me in her. ‘The Orphanage’ chapter is autobiographical. I put Amal into my life for the three years that I spent at Dar el Tifl. Some of the character names were changed and a few of the events, but most of that chapter is entirely real. There are other parallels between our lives that emerged unintentionally. Amal comes to the US alone and ends up as a single mother without any family around her. That certainly mirrors my life to some extent.”

The point of departure for the novel began in 2001 when Palestinian politician and academic, Hanan Ashrawi wrote to Abulhawa after she read an essay she had written. Ashrawi told her it sounded like she could write “a first-rate biography. We need such a narrative.”

The following year Abulhawa traveled to the Jenin refugee camp after hearing reports that a massacre was taking place, and what she witnessed there spurred her to write — as she concludes in her notes at the end of Mornings in Jenin, “the steadfastness, courage, and humanity of the people of Jenin were my inspiration.” But publishing a novel about modern Palestinian history in the West and in particular in the US is not an easy task. There have been few fictional accounts, although some memoirs have resonated with readers and have proven to be more effective than many political essays, such as academic and medical doctor Ghada Karmi’s 2002 In Search of Fatima.

Echoing Hanan Ashrawi, Karmi said at the time that she had noticed “the Jewish narrative of persecution and suffering had been conveyed through the medium of novels, poetry, films and theater. I could understand this. But why wasn’t our story being told? So I thought I’d write the story of my life.”

Although Abulhawa’s novel has been most popular in Europe, she feels it is “slowly reaching people in the US. I think times are changing. There is a new generation of writers who have lived most of their lives in the West and we are telling our story, finally, in our own voice and in Western languages. It has been Israel’s narrative that has dominated literature until recently, which was mostly propelled by Leon Uris’ novel Exodus. It was natural that the first story be that of the conquerors, because they were mostly from Europe and spoke in the languages and nuances of western cultures. They also told the story that the West wanted to hear. It was easier to hear a story of a land without a people. It was a romantic happy ending. The Palestinian narrative was in Arabic. It was unappealing, and it didn’t reach the West in those early years. But our voice is coming of age in Western literature now and I think there is a real interest among readers to hear our story.”

Nevertheless Abulhawa hasn’t had it easy in the US as a Palestinian activist, and in one case came up against shocking verbal abuse by Harvard law professor Alan Dershowitz during the Boston Book Festival, which she handled with aplomb.

“Unfortunately, there remains a taboo and active silencing associated with our story,” said Abulhawa. “So, it is probably harder to get a narrative critical of Israel published, but that is becoming less and less so, especially now that there are prominent editors, like Alexandra Pringle of Bloomsbury, with the courage and integrity to take on novels that other editors are afraid to touch because they might challenge the popular narrative that mainstream media pushes.”

When she first began to write her book, her intent was political, in order to bring the Palestinian narrative into Western literature, but she soon got caught up in her characters and became 100% novelist: “…once the characters came to life, my only goal was to be true to them – to tell their story with honesty. I did not think about the audience. I didn’t think about political correctness.  I didn’t think about politics at all. It was just about the people in the story. It was about the land and the trees and what they would say if they could speak. I loved every character in the novel, without exception.”

Abulhawa recently contributed a very personal short story to a collection of essays by Palestinian writers that will also be published by Bloomsbury and she is working on a new novel, in between her full-time job as a scientist and a non-profit she founded called Playgrounds for Palestine.

The fact that Mornings in Jenin has been published in Arabic makes her feel “…elated and nervous! This was the most important translation to me, of course. Many members of my family – cousins, aunts, father, etc. – will be able to finally read it.  That’s very exciting to me. I want to be accepted as a Palestinian writer, even though I write in English. That I cannot write in my native tongue is a sad condition of the ‘Shatat’ [diaspora] and ‘Manfa [exile].’”

Susan Abulhawa will be taking part in the Abu Dhabi International Book Fair on Wednesday, March 28 at 5:30 p.m. she will be interviewed by ADTV journalist Fatima Al Beloushi. On Thursday, March at 12.15 p.m. she’ll be part of the panel discussion “Where the Heart is” — on the topic of “home” and writing — along with cookbook author Sally Butcher, travel writer Tim Mackintosh-Smith and poet Tishani Doshi.