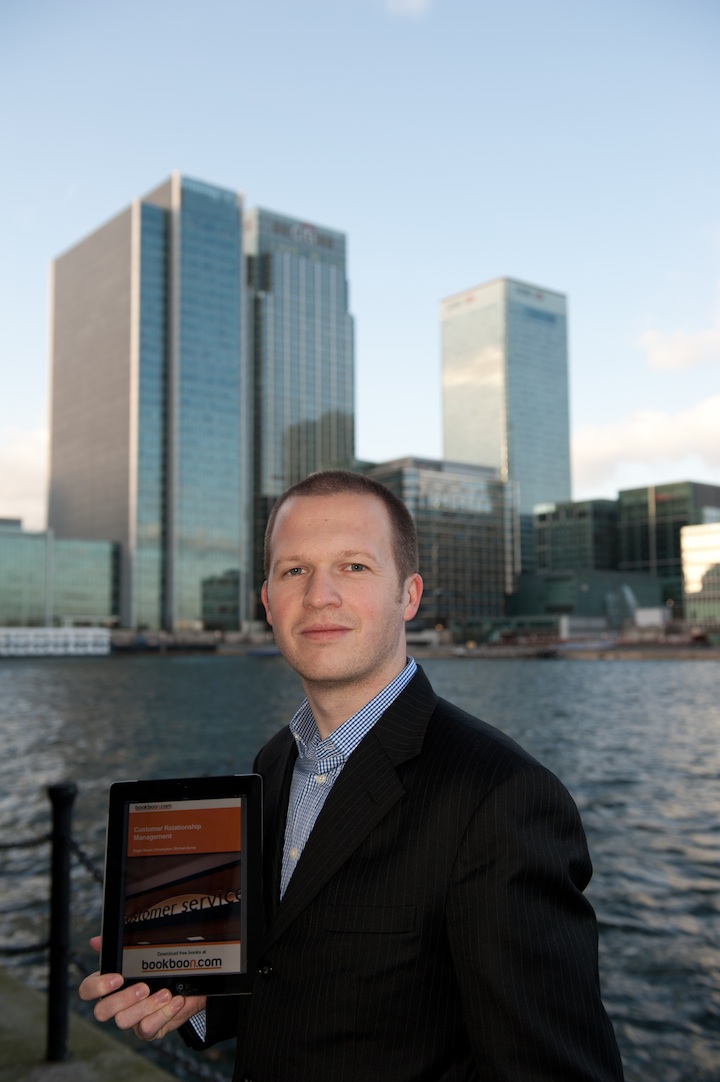 COPENHAGEN: “I don’t think it’s immodest to say it, but I believe we’re the biggest e-book publisher in the world,” says Thomas Buus Madsen, co-founder and COO of Danish e-book publisher Bookboon. “To give just one reason why, over the last weekend in February we registered 970,000 downloads from Friday through Sunday, which was our single biggest weekend so far. In 2011, we had a total of 11 million downloads in all and there’s no reason for us not to hit 50 million by the end of 2012.”

The secret of Bookboon’s popularity: “All our books are free, of course.”

The son of a publishing family — his parents own Ventus Publishing, a respected Danish textbook and dictionary publisher — Madsen was inspired to start Bookboon after watching a fellow student at university take the one copy of a textbook for a particular class out of the school library, make 50 photocopies and start selling them in front of the classroom. “I’d spent my whole childhood packing physical books for my parents, but once I saw that, I knew textbook publishing didn’t have a long-term perspective.”

Working with his brother, Madsen launched the company in 2005, initially focusing providing academic textbooks and business books for the Danish market. The business model was simple: provide free e-books and pay for them by embedding advertising every three to five pages in the book. The two had previously worked on the launch of the free newspaper METRO in the Danish market and were confident it could work. Sales teams were established across Europe and managed to attract advertisers keen to reach students. Thomas Buus Madsen: "I want us to become a global brand."

The range of titles focused on specific verticals, including accounting and economics, IT and engineering, and management and personal development. This helped with advertising: “We’re not doing fiction,” says Madsen, “these are factual books that have a lot of readers who are potential employees for companies. So, we are are looking at advertisers who are trying to brand themselves to students. Some, like Dell, want to sell them a computer, others, like the London Business, promote their graduate and executive education programs.” (The company says it will not take ads for alcohol, gambling, pay day loans or similar activities that will “ultimately diminish the seriousness of the books.”) Advertisers include several top commercial brands, such as UBS, IKEA, Accenture, Volvo, Maersk and Ericsson, to name just a few.

So far, model has proven a success. In 2006, Bookboon expanded to Sweden, and then to Germany and the Netherlands in 2007, but it wasn’t until their move into the UK and English books in 2008 that growth truly exploded, “English is the universal language — it is everywhere,” says Madsen. The company was helped by a timely feature on the BBC last year and since then the site has been doubling in traffic, with downloads growing at a rate of 500%.

The current catalog totals 1,000 titles, and Madsen expects to add another 300 this year.  Authors are recruited by the company to write books in their local languages — “we don’t translate,” says Madsen, “because something is always lost” — and the writers are paid based on the advertising revenue generated by the book and the number of downloads.”

“Our relationship with the author is the same as a conventional publisher,” says Madsen. “We commission the works, edit them, and publish them. Only the pay and distribution model is different.”

Madsen says that the quality is just as high as a textbook from a more traditional publisher and that numerous universities across the world are assigning the books, including state universities in Utah and California in the US. “These are strong assets. Our data indicates the 30% of our books are downloaded as primary literature, and 70% as secondary.” The books range from modest travel guides, which rely heavily on public domain information to several hundred page full-fledged software instruction manuals.

As for file formats, Bookboon is sticking entirely with PDFs for the moment. “It’s platform-independent and you can print it if you want. It’s one of the advantages we have over competitors like FlatWorld Knowledge or CourseSmart, who also offer free textbooks, but are really focused on trying to sell you a print copy. Instead, we keep it very simple, there’s not even a need to register, for example.” One page from a HR text offers a recruiting ad for Maersk.

PDF is also an ideal medium in which to deliver advertisements, which appear in the layout exactly as the advertiser intended and to allow them to be actionable, since they are hyperlinked back to the web. What’s more, the format is flexible enough that Bookbook can adjust advertising on the fly based on the reader’s geographic location and stated preferences. “The ads change based on location — so if you’re in central Europe, you’re going to see different ads than you’ll see in Northern Europe. And in Germany, where we’re very popular, we can adjust the ads state by state.”

Though he won’t reveal specifics, Madsen says company is generating mid-single digit millions in revenue. The focus is now on expanding beyond their mature markets in north and central Europe, and moving into Asia, southern Europe, as well as Africa. “You’d probably not be surprised to learn that Nigeria is very busy downloading our books, but you should also know that South Africa is proving a pretty decent advertising market for us.”

The original sales offices in Copenhagen, Stockholm, Munich, Amsterdam, and London have been supplemented with new offices in New York, Los Angeles, Johannesburg, Hong Kong and Sydney. The company employs 50 people total across all departments.

“Our short term goal,” says Madsen, “is to become nothing short of a world brand, and on the route to doing that we want to change the way that students learn. Currently we think textbooks are very overpriced. We think the model that we have can open up education to many more people — it can be a tool to increase the level of education in both the developed and developing world.”

He adds, “When people ask me what I do and I tell them ‘I make free e-books,’ they look at me like I‘m crazy. But based on how well the company is doing, the high quality of our books and how many people use them…I don’t think I am.”