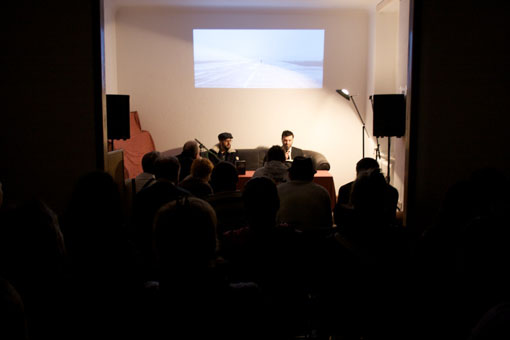 JM Stim, the author of Here Is Berlin, and Tim Mohr, who wrote the introduction and translated the English edition, are in the midst of an experiment in pushing the boundaries of new publishing models — is it possible to launch a book internationally, in three languages with grassroots marketing and a pan-European book tour? Read about more about the project and or follow the tour as Stim reports here on Publishing Perspectives.

Mohr promised to pick us up at 3 p.m.; at 4 he pulls up in front of the bar. We leave Perez deep in old West Berlin with virtually no money but with a ticket to Hertha vs. Bayern Munich, supposedly the game of the year when it comes to Berlin soccer. Perez is able to take care of himself at this point, and, if not, some of the Hertha frogs, the infamous hooligan firm, will surely take care of him. Leipzig is quite a ride away, but as we’re approaching the inner city after a two-hour drive, it slowly dawns on us that we’ve landed in a little version of the German capital, though with a somewhat different vibe to it. Hip cafes, bars, restaurants and clubs stuffed in or in between beautiful old buildings, and, on top of it all, a huge fortress-like town hall that’s lit up with pink spotlights. Something’s going on here. Ilses Erika, the club where we are supposed to read around 8 PM, is down an unmarked staircase in the basement of a huge building. It consists of several small dancefloors, lounges, and bars winding through the bowels of this building. It’s well known beyond Leipzig for the cool concerts and DJs it books. It’s also the place where we’ll to hook up with Clemens Marschall aka Rokko Anal, the publisher of the book; initially he’d wanted to come along for the entire tour, but an illness that he described as “something pretty close to a stroke” just a week before we left New York, had hindered him—until now. He and his girlfriend show up just minutes before the show and give me all kinds of shit for not having picked them up in Berlin as I had promised. I apologize for the simple reason that, well, he’s right. I had just totally forgotten about them.

After everything is sorted, we wander through town for a few beers. Every bar and café has a sign in the window: READING TONIGHT. The Leipzig Book Fair is on. Not surprisingly, our reading—which features three other acts, is fairly sparsely attended. By 5:30 AM we’ve crash-landed at the apartment of a friend who works at a local radio station—and who had done a great review of the book on the air. She explains to us that even for Ilses Erika it’s tough to get attention for a reading with 2,600 writers in town. From that perspective, she says, attendance was not bad at all. From a sales perspective, however, it was a disaster. Mohr tells me to post a video of “Nightrain” by Guns’n’Roses on Facebook without any further comment. I celebrate the dying seconds of what I will remember as my 37th birthday reading the back cover of Stephen King’s It and fall asleep.

Sunday, March 18th: The French, the Americans, the dead: Kreuzberg Photographer Johnny Perez on the autobahn

It’s around 4 p.m. on the Autobahn and the first thing we hear on the radio driving back to Berlin after having overslept hard due to extraordinary circumstances is the final score of the Hertha vs Bayern game. It’s 0-6 and we’re getting worried that Perez might not have made it back to the joint where we set him up. After having unsuccessfully tried to touch base with Rokko we learn that he has already gotten a train back to Berlin with his girlfriend, thinking we’ve ditched him again. Fuck it, we have a job to do and in our case it’s presenting the book in French and English to expats in Berlin. Tonight’s reading at the bar Sofia in the Kreuzberg district is being left totally to Mohr and the wonderful Everest Girard, who translated the book into French. I’m only doing the Q&A and it’s going pretty good up to the point where the audience is actually applauding the translators more than me. Hmm. Mohr, still feeling the pain from yesterday night, heads back to Mitte, in the former East, while Perez, Girard and our new-found Portuguese translator Marcia go back to my Neukoelln neighborhood to talk business. I try to reach the publisher at 4 a.m. before I go home but get no answer whatsoever.