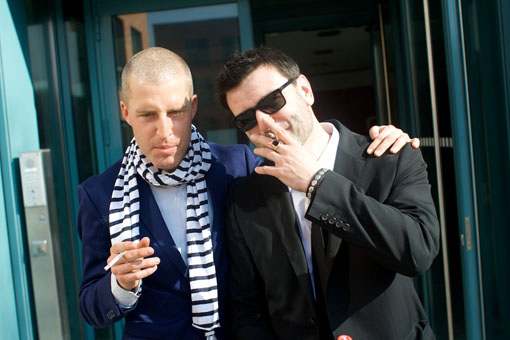 JM Stim, the author of Here Is Berlin, and Tim Mohr, who wrote the introduction and translated the English edition, are in the midst of an experiment in pushing the boundaries of new publishing models — is it possible to launch a book internationally, in three languages with grassroots marketing and a pan-European book tour? Read about more about the project and or follow the tour as Stim reports here on Publishing Perspectives. Cottbus, Germany, is 125 kilometers east of Berlin, a city of 100,000 that’s nationally-renowned for its architectural college. A four-lane autobahn — with a few short no-speed-limit stretches — connects it to Berlin, and as we set off in a borrowed 2003 VW Golf, the pine tree-lined highway has Mohr and the tour photographer, Johnny Perez, in serious Kraftwerk-mode. Well, Kraftwerk punctuated by bursts of Wham (see video).

As we pull off the highway, we hear a teaser on the local radio station for tonight’s reading at Galerie Fengo. It’s already dark in town when the Here Is Berlin circus arrives. Cottbus is dark. Real dark. We park German style — on the sidewalk — right in front of the address where the reading is to take place. It’s dark, too, but there’s a poster for Here Is Berlin in the window. Whew. We knock on the glass and a guy in a white t-shirt, skinny jeans, and black woolie cap eventually opens the door. As we pass through a blood red antechamber lined with sculptures and paintings, it’s clear this entrance is actually a portal to an entire house of culture: three gallery spaces and a bar on the ground floor, an event space upstairs, and the gang of art-minded locals who run the place living in the rest of the five-storey building. Upstairs, bottles of beer and Club Mate energy tonic are popped open as a few of the residents smoke hash at a kitchen table. This place is like a little corner of 1990s Berlin tucked up against the Polish border.

While we’re upstairs skeptically listening to the organizers tell us at least fifty people are coming, the space is filling up downstairs. Eventually the audience is shepherded up to the event space. The MC for the event is a gorgeous young woman with bright dyed-orange hair who works for the local radio station. She introduces us and we give our presentation for the first time in Europe — to a crowd that seems sympathetic. As we learn afterwards down at the bar, it consists mostly of young people who were born and bred in Cottbus but go to Berlin on a regular basis to work or just to hang out in the big city. There are a few haters — four to be exact — who make it a memorable evening (favorite audience question of the evening: “I mean, you only lived in Berlin for two years and wrote a whole book about it — how much more presumptous can you get?”), but due to never-ending shots of Jaegermeister that the otherwise friendly volks of Cottbus ply us with, we find ourselves happy to stick around before setting off again for Berlin around 4 a.m., at which point Mohr gets nailed by a speed trap while distracted by Perez begging him to return to Cottbus city centre for a second round of what he says are best kebabs he’s ever tasted in entire his life. Good that it’s not our car.

Friday is supposed to be one of the highlights of the tour, the presentation of the book in Berlin, the city that is a second home for both me and Mohr. The event is slated for the bar that served my local watering hole during the time I was working on the book, from 2008 to 2010. It’s called Lange Nacht (Long Night) and is in the city’s hottest current district, Neukoelln, a former working class enclave in old West Berlin next to the huge park that’s been made out of the shuttered Tempelhof Airport. Smiling crowd at the Lange Nacht even in Berlin

But first, we have to make it to Potsdam by 1:30 p.m. for an appearance on Radio Eins, one of the more popular stations in Berlin, and definitely the most respected. Waking up late after our early morning arrival from Cottbus, we drive feverishly toward the radio and movie studio complex on the shores of Griebnitz See, a swank lake district just outside Berlin proper. We make it with a good five minutes to spare. After the interview, we run into Benjamin von Stuckrad-Barre, a bestselling German novelist and talkshow host who turns out to be the next guest on the station, and who really, really loves to smoke. Stuckrad-Barre and I have a fag together, chat about Vienna and some of our common friends and acquaintances, all very nice. As the afternoon drags on, I get more and more nervous despite dockside beers on Griebnitz See. Fortunately Mohr and Perez manage to calm me down, the former with the rose-embroidered shirt he puts on for the reading, the latter by telling the story of how he once drugged Jean-Claude van Damme at a meet-and-greet. As the event in Lange Nacht begins, the funny, highly personal introduction by local writer Tom Liehr sets the mood for the whole evening. By midnight, I had not only regained my confidence and sold quite a few books, I had also toasted in my birthday. Even so, I suspect Mohr is thinking about substituting me with Stuckrad-Barre. Fucking translators. Whores, all of them.