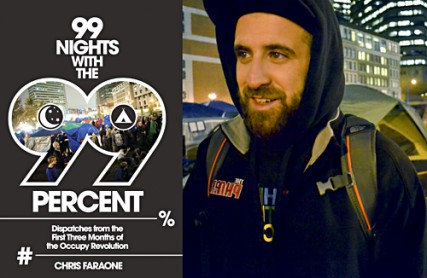 My father’s advice: develop a compelling product, sling it like your kid is starving, and never trust distributors. I’m a major publisher’s worst nightmare. A hard-driving journalist, I work what feels like 100 hours a week, and have little time for friends and family, let alone for finishing a side project after blowing the advance. I’m also a bit of a volatile commodity; two weeks ago, for example, I engaged in a bloody radio battle with conservative hitman Andrew Breitbart, the death of whom just days later spurred a number of his followers to threaten my “short,” “vile,” “homeless-looking” “liberal ass,” as well as anyone who I associate with.

Finally, there’s my history of attacking the comparable record industry; anybody from the world of publishing who has read those spiels would surely find me unattractive. At least that’s what I’ve told myself over the past four years, during which I’ve spent more time than I wish to tally penning failed proposals for doomed ideas.

So by the time I found myself producing thousands of words every week for the Phoenix, covering 2011’s biggest news story, Occupy Wall Street, I’d lost hope in the conventional publishing route. Furthermore, the thought of writing a standard proposal for 99 Nights with the 99 Percent seemed futile; Occupy started on September 17, 2011, and my book was already half-way finished by December. Had I sweated out a deal, countless less-worthy writers would have beaten me to the punch, leaving me to be the late-comer on a somewhat evil corporate imprint – if I even got that lucky.

Most importantly, I grew up learning about boutique publishing from my father, Charles Faraone. His company, Once Upon a Planet, has sold more than 5 million units outside of the establishment system. One of his books, Joel’s Journal and Fact-Filled Fart Book, a manuscript by the late satirist Donald Wetzel, was a staple in every tchotchke shop nationwide for decades until the gift industry ceased to exist. The big seller that my dad wrote himself, Let’s Hug, is still today the definitive work on a topic that many hold close to their heart, while his ruminations on hugging were featured in the first-ever Chicken Soup for the Soul and many subsequent editions.

So in late October of last year I decided to take the plunge with an Occupy book, heeding my father’s advice: develop a compelling product, sling it like your kid is starving, and never trust distributors. Without the formalities of Kickstarter, I raised about $4,000 from friends who could spare a few hundred bucks apiece. I then set up an account with Lighting Source, and tapped a talented designer – Alfredo Rico-Dimas – to thread it all together. From there came the Facebook fan page, and a crush of Tweets, posts, and emails. I took one week off from my Occupy beat in January this year to finesse the package, and then hosted an editing party at which Boston’s finest journos came to redline drafts over cold beers. In the end, my book was available on Amazon in early February – weeks ahead of my already tight schedule.

I don’t blame my agent for anything. For whatever reason, as far as I can tell, the whole industry overlooks writers who make moves outside of New York. Meanwhile, I regularly drop cover stories in the Phoenix, New England’s largest alternative weekly, which is read by hundreds of thousands of people. In any given month, I make more than a dozen radio appearances. My social networking game is tight, and I’ve won a number of awards for feature writing and investigative reporting. Yet I’ve seen everybody from Stuttering John to Guy Fieri score deals before me. And don’t get me started on the one-hit bloggers who got advances while I have been eating grilled cheese and dodging bill collectors.

To be fair, the publishing industry’s reluctance to acknowledge authors like myself was just one omen pointing toward independent pastures. Another one is that I wanted full control to present 99 Nights the way that I envisioned – as a sleekly designed time capsule packed with photos, illustrations, and a timeline to carry readers through the first phase of Occupy. Then there was the validation to self-publish, which came when Columbia Journalism Review ran a long profile acknowledging my hustle. How many writers at big time houses can slap that on the jacket of their first book?

At the time of this writing, 99 Nights is selling out at a number of Boston independent bookstores each week, and is charting at the top of Amazon’s “Hot New Sellers” list in its category, behind only Rachel Maddow and Russ Feingold. I’ve got a kickass publicist who has already landed me in numerous news outlets, and I’ve had more than a few distribution offers – still, nobody’s willing to pay for books up front. I haven’t been hit up by a single major publisher, nor have any elite academic imprints approached me.

I guess I really am their worst nightmare after all.

99 Nights with the 99 Percent: Dispatches from the First Three Months of the Occupy Revolution will be released nationally (print and e-book) by Chris Faraone’s Write To Power Books, March 27, 2012. www.WriteToPower.net. The print version of the book is available now available at Amazon and select Boston independent bookstores.

Chris Faraone grew up in Queens, NY and graduated from Hobart College before entering post-graduate studies at New York’s New School and Boston University’s College of Communication – he earned a Master’s in Journalism in 2004 from the latter. After graduation, Faraone dove into the field of professional writing as a hip-hop music critic, reporting for The Source, Spin, the Boston Herald, Boston’s Weekly Dig and Boston Magazine. He landed on staff at the Boston Phoenix in 2008 and since then has received multiple accolades and awards from the Association of Alternative News Media (AAN) and the New England Newspaper & Press Association (NENPA) for investigative and news reporting. You can follow him on Twitter.

DISCUSS: What Can the Occupy Movement Learn from Self-Publishing?