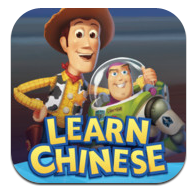 Disney Publishing Worldwide, the world’s largest publisher of children’s books and magazines, has launched its first language learning product, Learn Chinese: Toy Story 3. The app will be available in the U.S., China, Australia, as well as 25 additional countries throughout Europe and Asia. “As digital media continues to impact the way children learn,” said Russell Hampton, President, Disney Publishing Worldwide, “it is up to us to create products that enhance that learning experience. Disney is all about bringing the most creative content to children and families throughout the world through innovative technology. Our Language Learning app delivers on that goal while allowing children to read and learn wherever, whenever, and however they want on their mobile devices.”

The app is the first in a series of story books that combines Disney’s appeal to young people with proven language learning methods that allow children to learn English and Mandarin vocabulary and grammar. The first app story contains multiple versions of the Disney Pixar hit film Toy Story 3, with each new level increasing the ratio of Chinese to English, mixing the new with the known by progressing through 5 levels of the story: English only, Beginning Chinese (25%), Intermediate (50% Chinese), Advanced (75%) and finally 100% Chinese. “Learn Chinese: Toy Story 3” is based on the educational approach to language learning called Diglot Weave. “This innovative read-along app is a real industry first,” says Dr. Yuhua Ji, Professor and Chair, Department of English Language and Literature (DELL) Xiamen University and pioneer of this method of Language Learning in China who acted as adviser on the project. “A Diglot Weave story is told partially in the native language of the learner and partially in the language being taught. As the learner’s understanding progresses, an increasing proportion of the story is told in the foreign language until the reader is experiencing the story entirely in that foreign language. Numerous studies have shown the effectiveness of the Diglot Weave method.”

A Disney spokesman added that additional stories will be added to their “Learn Chinese” line, and that a Spanish language learning app might be next.