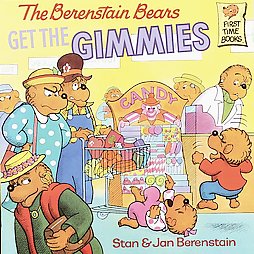 Jan Berenstain’s 300 books have sold more than 200 million copies and soothed just as many souls.

Jan Berenstain, who with her husband Stan created the Berenstain Bears series, died on on February 27, after suffering a major stroke. She was 88 years old. Now Jan knows the answer, and may she rest in peace.

I was lucky enough to have a treasure trove of Berenstain Bears books drop into my lap roughly five or six years ago, back when my 8-year-old was still a toddler. A neighbor had cleaned out her kid’s bookshelves. The Berenstain Family charged into my imagination once again after a long, long sabbatical: Papa Bear, Mama Bear, Sister and Brother Bear, and eventually “Baby Makes Five.”

Being a new parent brings insecurities out. New parents have to dive into those first tiffs on the playground, and sooth the subsequent hurt feelings. Early childhood brings with it a litany of firsts and the lessons that go with them: the first sleepover at the grandparents’ house, the first day of school, the first pet, the first pet dies…you get my drift. There is a Berenstain Bears tale to accompany each one of these passages.

Suddenly, I had a title to lean on at bedtime for every difficult new challenge. That tiff on the playground? Pull out The Trouble With Friends (Sister Bear and neighbor Lizzy can’t agree on how to run their pretend school). Having trouble keeping the little guy in his own bed? The Berenstain Bears’ Bedtime Battle to the rescue (actually, the version we inherited was an one in which a spanking is threatened if Sister Bear doesn’t get back in her own bed, and I bet that this has been edited out in subsequent editions). Books about losing the first tooth and doing your homework came in handy a few years later.

Sometimes the family attempted to move into tricky territory, for example, with their Berenstain Bears and the Big Question on whether there is a God (Mama Bear tries her best to explain), and even a Birds and Bees story. But more often than not, they stay in tame territory like cleaning your room, being nice to your siblings, and not blaming your friends for all of your mistakes. The Berenstain Bears Get the Gimmies was a favorite in my house. In it, they managed to instill a sense of humor into the universal “gimme this, gimme that” syndrome. I found that I could dig up the question “Do you have a case of the Gimmies?” with my own kid and it was a well-met shorthand for “You don’t need these Sour Patch gummy worms now, so forgetaboutit.”

The formulaic style of the story telling is comforting, if not rote. In one oft-repeated plot, a kid Bear encounters a decision and, lo and behold, he/she doesn’t choose wisely. Kid gets in trouble. Parents yell and calm down and everyone makes up (just like real life, only with more fur and a cool tree house). The clear presentation of social skills and mores made it easier for me to navigate those hard days when I couldn’t muster an articulate lesson with my diminished mom energy.

An obituary that appears on Legacy.com said that 260,000,000 Berenstain Bear books have made their way into the hands of kids since they first came out in 1962. Turns out they were championed by no other than Theodore Geisel, children’s book editor at Random House, who you know better as Dr. Seuss. At a glance, the online Jan Berenstain Guest Book had drawn 301 signatures. Most of the people who reminisced were second or third generation readers.

I mourn Jan Berenstain’s passing because it’s made me reminisce about my own years as an early reader, and now, my son’s, which have blown by at an alarming rate. We’ve moved beyond the Bear Family into smaller print and less pictures, but those fuzzy Bear Family lessons remain.