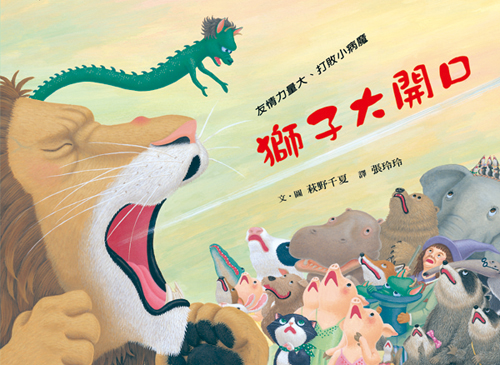 I’ve got to admit: during my first couple of hours at the 49th Annual Bologna Children’s Book Fair, I felt totally and completely overwhelmed. So many people and publishers from so many places, so many books and booths, so many…choices. I’ve always been a booklover, but even for me, it was nearly overkill. One of Grimm Press' gorgeous titles from Taiwan

But now that I’ve gotten a slightly better sense of the lay of the land, and I’m feeling less like I’ve been dropped into the middle of a whirlwind and more like an actual participant (or actual observer to be more precise), here’s a little of what I’ve picked up so far:

The general consensus is that the sense of crisis and impending doom, both in general terms regarding the economy and more specifically for the publishing industry, is gone, replaced with a quiet but growing sense of optimism. As a first time attendee, I can’t testify to the mood last year, but I have felt a controlled sense of confidence wherever I go and with whoever I speak with.

The tech guys still seem convinced that the world is theirs. In the little “tech corner” in hall 26, (O’Reilly TOC Pavillion, Digital Café, and a small group of developers), one of those developers, who shall remain nameless, when asked how things were going, replied, “For us in this corner, it’s great, but everyone else out there is prehistoric.” I hate to be the one to break it to him, but my guess is that long after the time for his device has come and gone, many of those beautifully illustrated albeit “prehistoric” children’s books from publishers as diverse as Taiwan’s Grimm Press and Slovakia’s SPN-Mlade leta, s.r.o., will be being happily being passed down to future generations of young readers.

And finally I’d like to say this about Bologna. What has surprised and pleased me is the extraordinary, almost palpable feeling of fellowship I sense among the fair’s attendees. In some ways, it feels like an odd extended family reunion, as old relationships are renewed, and new “babies” are shown and passed around to be admired by one and all. I fear that at some point my natural cynicism is going to kick in, but for now, this sense of a family united not by blood but by a common love of children’s books is one that I truly appreciate.

Dennis Abrams covers the children’s publishing business for Publishing Perspectives. A prolific author of children’s non-fiction books, he has also curated three year-long group reads for us, including The Cork-lined Room (on Proust), Project D (on Dostoyevsky) and the on-going The Play’s the Thing (on Shakespeare).