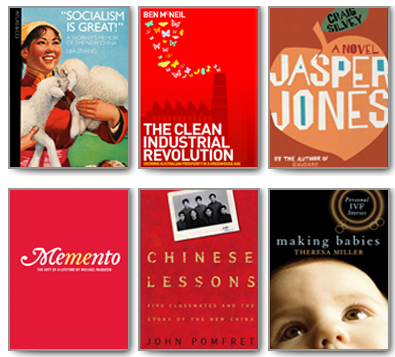 Zeitgeist Media Group represents authors who “write about a China that is much stronger and faster paced…the dark side of China.”

In today’s mercurial world in which publishers are struggling to keep up, literary agencies are also transforming and reinventing themselves. The aptly named Zeitgeist Media Group based in Brussels and Sydney is an example of how imagination and flexibility go a long way. It’s the story of two friends who met in China and had an interest in the book industry. In 2006, Sharon Galant, a multicultural Belgian who had studied political economics in the UK and was opening private English-language bookstores in China ran into Australian Benython Oldfield, who was taking a sabbatical after working as a publicist for Random House for seven years.

“We inevitably talked about books. There was lots of interest in China in the publishing industry. We were frustrated that China was always presented as a formatted subject either in a coffee table book or in books on the Cultural Revolution, or ‘scar literature’ as it’s called. The books about Tiananmen Square or rural nostalgia made sense but we felt there was a disproportion of them and that the West was stuck in the ’60s and ’70s while [present-day] China was so dynamic. We thought it would be great to get fresh, contemporary voices out to publishers,” said Sharon Galant. A sampling of Zeitgeist's numerous authors

Shortly after meeting, Galant and Oldfield set up Zeitgeist, adding Media Group to the title to include a publicity department run by Oldfield.

Getting these contemporary voices to Anglo-Saxon publishers was not an easy task with a market often dominated by female Chinese writers such as Lisa See or Jung Chan, who were based in London or in the US and who knew how to write for a Western public noted Galant.

“We wanted to find writers with a critical voice who lived in China. They write about a China that is much stronger and faster paced, they write about the nitty-gritty of modern life, the dark side of China and probably not always what Westerners want to read.” ...while Sharon Galant works from Belgium

This new style of writer was embodied in the author Murong Xuecun, who Zeitgeist represents but also in writers such as Lijia Zhang, or Chen Xiwo, Liu Jian, and Li Er, who have been translated into English in a collaborative project with Hong Kong based translator Harvey Thomlinson, founder of Make-Do publishing. Zeitgeist has an ongoing agreement with Make-do whereby they try to introduce these authors in the West by selling US, UK, Commonwealth, Canada, and ANZ rights.

After several years in China, Galant and Oldfield eventually moved back to Belgium and Sydney and expanded their agency to include international authors of fiction and non-fiction, tapping into what Galant describes as a “nomadic writing community.”

“There’s a whole world of writers and thinkers who are not necessarily in one place. They’ve been uprooted from their home market…By word of mouth we have become known as an agency that is interesting to cosmopolitan writers.”

Some examples of Zeitgeist authors include Franco-British classical archaeologist Alexandre Mitchell, whose archaeological thriller has just been sold to a British publisher, Italian-Iraqi author Michelle Nouri, British adventurer Graham Hughes, who recounts his attempt to visit every country on the planet in his travel memoir, The World is Slightly Pear-Shaped, or Laurence Brahm, an American author, global activist, international mediator, and political columnist who signed up with Zeitgeist feeling that its agents “saw beyond the Hudson river.”

Dividing Up the World

Galant and Oldfield work together on some authors, but have more or less “divided up the world,” with Galant covering Europe, and Oldfield taking care of Asia. Oldfield represents a number of well-known Australian writers, such as Craig Sylvey, and Boyd Anderson, and coordinates PR events and book tours for authors visiting Australia, who are not necessarily Zeitgeist clients. His experience in marketing means that Zeitgeist is particularly active in promoting its authors, producing book trailers among other publicity tools. Oldfield also maintains a network of Chinese translators who work in Australia.

Ironically, having a Sydney office can sometimes be a problem for Galant in the UK. Most British publishers want to acquire rights that include the Commonwealth, but because of Zeitgeist’s Sydney branch, Galant and Oldfield like to keep ANZ rights “unless they give us so much money that it’s worth is for us,” said Galant, who advocates breaking up Commonwealth rights.

Although Galant is based in Brussels, she travels to the UK every two months, remaining very close to publishers, nagging them “politely and elegantly.”

“When I first started I thought this would be more of a challenge, I was worried publishers would say ‘you’re not based in the UK’, but actually, I’m around. I’m still there enough for them to keep me in mind.”

Zeitgeist will examine “all sorts of proposals in English or translated samples. We look for global literature; books that inspire thinking, and travel. And we want our authors to be promotable… Media is an area where we want to distinguish ourselves. The signing of a contract means the beginning of the most difficult part of our job. We try to develop personal relationships with editors, and the publicity and marketing departments, really we work across the board.”

DISCUSS: Should Agents and Publishers Break Up Commonwealth Rights?