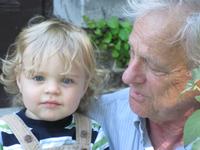 Ascorbic Acid, AKA Vitamin C, was in short supply in Chicago this week

You know that photo software that allows you to see what a person will look like in ten years? By Saturday, most AWP attendees have gone through that process naturally. Subsisting on beef and beer will do that to a person. I’ve forgotten how it feels to ingest Vitamin C. I’ve also learned that a person with scurvy is said to be “scorbutic.” Don’t you just love words?

This morning a woman eating an orange stopped by my table to chat; I didn’t hear anything she said—my eyes were glued to that orange. She’ll never know how close I came to killing her for it.

She probably thought I was staring at her chest — which at AWP is okay.

Last night at the hotel bar the girl sitting next to me was scribbling in her journal when this dude stumbled up to hit on her. He asked if she was in town for AWP. She said yes. He said, “So, you’re a writer?” She replied, “No, I’m a shoemaker.” The subtlety stumped him. After he recovered, he said, “So what are you doing at a writing conference?” She heaved a great sigh, and went back to writing.

How rude and obnoxious, I thought, to interrupt someone while she’s writing in her journal.

“Did you enjoy that?” I asked her, interrupting while she was writing in her journal.

“I did not,” she said. Before returning to her journal.

To be fair, AWP is not a place where much writing gets done. Literary output must hit rock bottom these four days (someone should do a study which verifies this). All the writers are together in one place, rubbing elbows. It’s like when all the Grey’s Anatomy doctors come together for a wedding; nobody in that group is doing any neurosurgery for the next few hours. Not that every writer in the world is here. Yesterday I learned one of my closest friends is moving to Korea on Monday and will be gone for 3-5 years. In the new version of Wisconsin, his wife lost her teaching job, he couldn’t find work, and the state cut their unemployment. He had to drive down to Chicago to get his visa, so we had a farewell beer together. He’s a poet, one of the best I know, but yesterday was the closest he’s ever come to sniffing AWP. I forget his exact words, but the gist was this: “If I want to masturbate, I’ll do it at home.”

Later in the day, word came down that Jim Hazard, beloved poet and professor at UW-Milwaukee, died unexpectedly. He had skipped AWP, but his wife, Susan Firer, was here.

I had an independent study with Jim Hazard back in 2005. The study consisted of meeting in his office once a week and talking about books we loved. Best class I ever had. Jim had a sign on his office door which read “WWMTD?” If you wanted to know what it meant, you had to ask him. Or happen to know how much he loved Mark Twain.

If you can find Jim’s poem “The Snow Crazy Copybook” (from A Hive of Souls), read it. It’s one of my favorite favorites. And is a fitting accompaniment to today’s cold Chicago flakes:

I was out shouting this afternoon but in the snowfall my
voice was muffled. Like the snow was microscopic animals
eating the sounds of my shouting. Later I brought in a
bucket of snow to melt for drinking water, and then drank
that brew of snow and my own voice.

My hotelmate had recently shot some footage of Jim. This morning we perched the laptop on the nightstand and watched the video, hungover and depressed. We were both very much ready to go home.

But the show must go on. And it did. First thing this morning I overheard the following:

“[Celebrity writer] didn’t remember me. That threw me for a loop.”

“You’re already on the Loop.”

“Get me off this f*cking Loop!”

I never did try that sangria yesterday, and will never get the chance now. Early this morning over the loudspeaker we heard, “Serving alcohol at your table or booth is strictly prohibited.”

Candy works better, anyway. Exhibitors offering free candy get far more traffic than those who don’t. (Someone should do a study which verifies this.) Writers enjoy their booze—we’re legendary for it—but deep down we all are, and will always be, children.

My favorite out-of-context line of the day comes from Dan Manzanares of Lighthouse Writers Workshop, who said “All I wanted to do was take my pants off.”

Exhibitors are handing out freebies left and right today; nobody wants to have to ship a bunch of books back home. But AWP attendees know this, so many of them won’t buy books Thursday or Friday, knowing they can get those same books for free Saturday. “We’re writers,” they say. “We’re poor.” And presses and literary magazines don’t mind giving books away to other writers and editors. But Saturday is also the day the Book Fair is open to the public, and who wants to give all their books away to the general public?

It’s a catch-22. Or something. Or maybe it’s not. Perhaps exhibitors on Saturday give books away only to those wearing a badge. (Someone should do a study which verifies this.) (Or was that my job?)

Last night the bartender told me there are two conferences going on in this neighborhood: one for writers, one for dressmakers. Some rah-rah writers would try for an analogy here, something about both groups being creators whose job it is to “weave” something into something else that is then called art.

Perhaps I came to the wrong conference. Then again, imagine three days of straight of asking, over and over and over, “So…what kind of dressmaking do you do?”

I might be the last one here. It’s early afternoon on the Loop and I haven’t seen a single AWP tote bag, nor any people with badges/credentials around their necks.

This morning my hotelmate and I shot some guerrilla footage in the hotel for his next promotional video. He thought we might draw attention from other writers, but all we succeeded in doing was making the hostess at the breakfast café call security. (Which never came.)

All the writers were gone. Twitter hashtag #AWP12 was abuzz with messages of “Loved hanging with all my writer friends,” and “Back to real life now,” and “I didn’t even sell half my books,” and “I sold almost all my books.”

My hotelmate packed his camera gear and hit the road for Atlanta, hoping to stop along the way and shoot some footage outside of Dolly Parton’s house in Tennessee. Before day’s end I expect a call from a Nashville jail.

So I’m back at the South Loop Club for what seems like the 27th straight day. (Free popcorn, cheap beer.) After the Kentucky/Florida basketball game ends, I am the only patron left. I have overstayed my welcome.

Tonight I’ll be back in Austin, and tomorrow it’s back to the grind. But “the grind” entails reading, writing, and talking with writers. My whole life is a less-concentrated version of AWP. After all the bitching I’ve done these past few days, you must assume this means I hate my life.

But I do not. You want to know, after four days and hundreds of conversations, the #1 most bizarre comment I heard at AWP? It was “I love AWP!”

Those words came from my own mouth, and the exclamation point was sincere.

David Duhr is Fiction Editor for The Texas Observer, Managing Editor at Fringe Magazine, and co-founder of WriteByNight. His previous article for Publishing Perspectives, “Is Austin Paradise for YA Writers?”, was published in November. Follow him on Twitter at @WriteByNight.