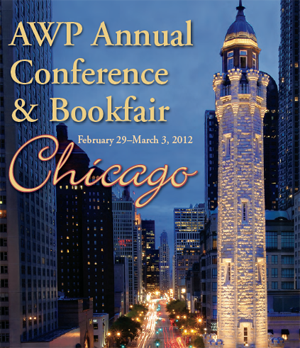 CHICAGO: I am one among 9,500 attendees at this year’s AWP conference. This is well over one million pounds of writers. In fact, judging by what I know about the lifestyles of most in our profession, it might be over two million pounds of writers. Most of which right now is focused on being seen, being heard, and trying to find a bathroom. After all, it is shortly after lunch, and in Chicago lunch means answering a question like “Would you like bacon and cheese on your kielbasa, or just cheese?”

Some 9,500 writers. Over 550 tables and booths. Hundreds of panels and events. I’ve already spent $80 today. It’s 40 degrees out. Organized by the Association of Writers & Writing Programs (AWP), this conference, by the numbers, equals four days of three open barstools between two different Hiltons, and the whole thing is one giant clusterf*ck.

So I’m writing this from behind my exhibitor table, which is at the ass-end of the furthest-away of four massive ballrooms full of tables and booths. Few people make it this far into the dim inane of the Book Fair. (“Dim inane” courtesy of Ed Abbey.)

Those who do make it this far stare, with glazed-over bloodshot eyes, at my cleavage. I feel like Anna Nicole Smith: every passerby judges me based on what he or she finds on/around my chest. Is he wearing a badge? they wonder. And is he worth talking to?

(The answer is a definite No on the first count, and an apparent No on the second.)

Anyway, according to the security guard at the Book Fair entrance, it’s not a badge—it’s a “credential.” “Can I see your credential?” he asks. It strokes our tender little writer egos. If we have “credentials,” we’re VIPs. If we have “badges,” we’re each just one of 10,000 other schmucks.

Over the next three days I’ll be writing about my time here, reporting back on things I see, things I learn, things I unlearn. And things I overhear. Because listening to writers talk to other writers is in itself worth the price of admission. And flight. And hotel. And $16 cheeseburger.

We are one awkward bunch, folks. Here is a sampling of some of my favorite overheard lines from today:

And the following back-and-forth, which I enjoyed immensely and am repeating in full:

For the record, that last is not something I overheard; it is something in which I participated. I’ll leave you wondering which side of the conversation was mine.

FYI, AWPers; for lunch tomorrow, go to this greasy spoon two blocks east of the Hilton called the South Loop Café. Not for the food, but because you’ll get the chance to experience the following conversation, which was far more bizarre than anything I’ve overheard at the Hilton today:

David Duhr is Fiction Editor for The Texas Observer, Managing Editor at Fringe Magazine, and co-founder of WriteByNight. You can visit his exhibitor table at the AWP Book Fair. It is in section B.F.E. He shall not be wearing his credential, so eyes up, please. Follow him on Twitter at @WriteByNight.