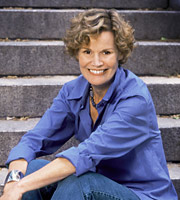 “This is an exciting day for me,” says beloved children’s book author Judy Blume. Random House Children’s Books announced that it will publish 13 of Judy Blume’s classic and often controversial books for young readers as e-books. The new e-book editions will be available beginning March 21 in the U.S. and Canada, wherever Random House ebooks are sold.

Ten of the titles being released are among her most popular titles, including:

Three additional titles will be released at a future date still to be announced: The One in the Middle Is The Green Kangaroo, Freckle Juice, and the picture book The Pain and the Great One.

Beverly Horowitz, VP and Publisher, Delacorte Press Books for Young Readers, stated, “Judy Blume’s voice has universal appeal. Her honest and witty books will continue to encourage reading, with an expanding reach in this format.”

Blume, currently living in New York City, said in the press release, “This is an exciting day for me. I’m happy that my readers, many of whom have been patiently waiting, will now be able to choose which format works best for them to enjoy their favorite books.”