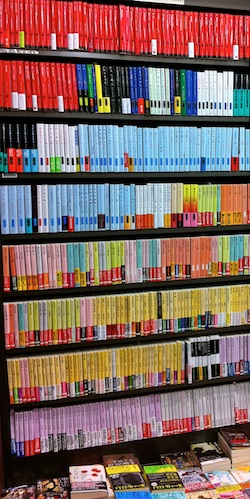 With little exposure in bookstores and Japan’s emphasis on mega-bestsellers, how’s a foreign author supposed to crack the Japanese book market?

There are exceptions, but few new foreign books hit the Japanese bestseller list.

TOKYO: Each publishing market has an effective limit on the number of foreign-language books translated and sold in print domestically. In Japan, the figure is around 8% of annual book sales and although a Harry Potter level event may nudge the needle a little, this figure will never vary by more than a percent. Given the Japanese print market is in steady decline, foreign rights teams are having to run harder each year just to stand still, and publishers of all sizes are left scratching their heads when a strong seller in its home market flops in Japan.

Foreign rights deals in Japan are brokered by a handful of international agents whose expertise lies in handling contractual matters and arranging for a domestic publisher to take on a book. The international agent has little influence over the release schedule and marketing of the book and is no position to demand from a publishing major an explanation for poor sales of a promising release. Foreign rights teams, several layers removed from booksellers on the streets of Tokyo, have to accept that these deals are “fire and forget” — take the advance and move on without looking back. I suspect that not even Lee Child was told why his first Jack Reacher novel is out of print in Japan. However, you can now join me on a virtual tour of a Japanese bookstore and see for yourself what is going on.

Even gifted with the virtual ability to read Japanese, you will find the layout of this store confusing. The Japanese equivalents of mass market paperbacks, bunko, are not arranged by author name, but instead are grouped by publisher. This peculiar arrangement is in place to ease the process of book returns to the distributor and certainly does not benefit Japanese consumers who, just like book civilians worldwide, think author name and not publisher when looking for a specific book. Let’s take a look at two big publishers active in bringing foreign content to Japan, Hayakawa Shobo and Kodansha. Your first thought might be that foreign authors are getting less than their 8% share of shelf space. Don’t cry foul just yet, though, since that is simply not the case. Kodansha is much the larger of the two publishers and hence provides a better sample size. In our virtual store, as with the real ones, Kodansha sets aside a single section for foreign books and this is, indeed, around 8% of Kodansha’s total bunko real estate. (See Figure 1. Virtual Kodansha). So far, so fair. Now take a look at which authors are being exposed to the consumer who is undertaking an ambulatory discovery exercise (or “browsing” in print speak). Patricia Cornwall and Michael Connelly are up there but something odd is going on. Assign a score of 10 to an exposed cover and a score of 1 to an exposed spine to get a list of the ten foreign authors most likely to be discovered by a consumer browsing the Kodansha section.

This list is a snapshot, but it reflects a persistent problem for market entrants. Not only does a new author have to contend with contemporary giants such as Patricia Cornwall and Michael Connelly, but also a panoply of ghosts of authors past. In the above list, the authors marked with an asterisk are dead and those marked with two asterisks are very much alive but make the list on the back of works published over a decade ago. Some new authors will benefit from posters, advertisements and book reviews in the national press but for many, the spine or cover of their book is the only publicity their literary effort will receive on initial entry to Japan. In the case of Killing Floor, the debut work of Lee Child, the cover art was entirely inappropriate for a fast-paced thriller. A new book has a window of twelve weeks to perform on the shelves before being returned to the publisher, and the publishers presumably don’t care which authors succeed provided some do.

Japan’s emphasis on established authors is reflected in the term rongu seraa. This word, common in publishing parlance, is derived from the English words “long” and “seller” and is a handy phrase to describe reliable, old book franchises which are guaranteed a certain amount of turnover. Just slap them up on the shelf, no publicity required whatsoever. Really old material will be out of copyright and, for foreign material, the translations are already in place. Anne of Green Gables, the gift that keeps on giving. Hayakawa specialize in mystery and science fiction. Perhaps they have a different approach. Have a look at the Hayakawa display (Figure 2. Virtual Hayakawa), though, and you will see their shelves are also heavy with rongu seraa. The entire top shelf and a good deal of the second from top is handed over to dear Agatha Christie. Bless.

Virtual tour over. It’s easy to see that the odds are heavily stacked against new entrants to Japan. But should authors accept failure as the likely outcome and what are the alternatives?

As of today, direct digital publishing is not an option since none of the 20+ major e-bookstores in Japan offer self-publishing programs. In effect, the mainstream publishers have extended their gatekeeper role from print into digital. This is about to change. The inevitable entry of Amazon, Apple and Kobo to the Japanese market will do nothing to hasten the digitization of Japan’s print backlist, but it will bring large-scale, open and transparent self-publishing programs. Overnight the closed ranks of Japan’s e-bookstores will be reduced to nothing more than a digital Maginot Line, around which the self-publishers will swarm.

Unlike print, there is no digital ceiling that limits foreign publishers’ access to Japan. Furthermore, the demise of the digital gatekeeper will lead to the emergence of access agents that offer an alternative to navigating Japan’s international agents system. Whereas international agents provide expertise in getting physical books into stores, the access agents will specialize in giving access to readers through marketing activities that build communities and facilitate reader-author interaction. Fulfillment, of course, will be digital first, but an equally important shift will be to relationships that are not deal-based but instead are predicated on an active and ongoing relationship between author and access agent. The corollary of this approach is that the financial focus moves from the advance to both author and access agent being rewarded for nurturing a franchise’s following over a period of years. Finally, the access agents will also undertake the role of the trusted third party that ensures translations are not only technically accurate but are in keeping with the author’s style and are consistent across a series.

For the first time, authors will be able to enter Japan on their own terms and actually engage with their audience. They will succeed or fail on the basis of their ability to connect with readers rather than on a roll of the dice. There has never been a better time for authors to look towards the East.

A regular contributor to Publishing Perspectives, Robin Birtle is the CEO of Sakkam Press, a digital publisher based in Tokyo and London. Robin can be contacted at robin[dot]birtle[at]sakkampress[dot]com.