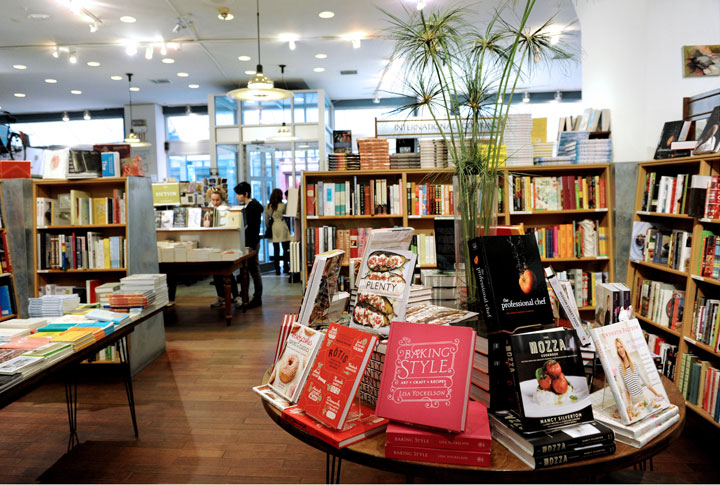 Something similar to the Scholastic Store and the NOOK, for starters…

NEW YORK: You can’t beat a weekend in New York City – whether you’re looking for culture, great shows, fine dining or a time out in Central Park. Or indeed, none of the above. Flying into with JFK with a day in hand before the recent O’Reilly Tools of Change conference, I elected to hit the bookshops.

Now, I’m as aware as anyone that you can’t judge the health of a nation’s booksellers by confining yourself to its most cosmopolitan city. New York, like London, Paris or Moscow, has a wealth of excellent bookstores catering for a wealthy, well-educated and urbane population. Of course, real estate prices are high, but the consumer profile is attractive enough for print’n’pulp businesses to thrive for – well, a little longer yet.

My American friends had helped me compile a long list of must-see stores, so, MetroCard in hand, I tore around the city. The experience was a little “if it’s 2:00, this must be Rizzoli,” so, rather than listing every shop, and doing none of them justice, I’ll focus on a few places that differed most from the London stores with which I’m most familiar.

Starting in SoHo’s Prince Street, I visited the excellent McNally Jackson. It’s the model of a city center indie – tight, but not too small, combining an intellectually rigorous adult offer with an attractive children’s section, a café, magazine section and a busy Espresso Book Machine. In my address at TOC, I spoke about how the indies of the future will be like “little superstores,” and McNally Jackson proves the point – it manages to be both elite and accessible, a democratic mix that we always find a bit difficult in England.

Around the corner on Broadway was something very different – the Scholastic Store, which sits on the ground floor of the children’s publisher’s global home office. The store manages to combine a riot of primary colors, character brands, and instore parties at the Imagination Clubhouse, with being a great kids’ store, offering engaging service and solid ranging (not just Scholastic titles). There’s nothing remotely “worthy” about the store, but nor does it dumb-down its offer – indeed, the old “reading is a fun adventure” slogans come to life in a place like this. Why have we got nothing like it in London? (Folks, give me a call if you’d like to open one.)

A short walk from Scholastic took me to the East Village, and St. Mark’s Bookshop, where I tasted intellectual and sociological rigor in a bookstore for the first time in many years. St. Mark’s has been in business since the mid ’70s, and maintains a radical feel that provoked my rather dormant political ardour (whilst reminding me I was now firmly among the middle-aged bourgeoisie). St. Mark’s projects its compelling belief in every book it selects for its shelves – books to make you think, books to provoke a response, books to challenge your assumptions. It’s a feature of the West’s pre-Occupy docility that so few radical bookstores have survived, but St Mark’s is a powerful reminder of the importance of the printed word in shaping political and cultural discourse.

A store everyone had encouraged me to visit was WORD in Brooklyn’s Greenpoint neighborhood, and it was well worth the short subway ride. WORD is a small but perfectly-formed neighborhood bookstore that has an eclectic and interesting selection of books for its local customers; however, it isn’t insular and local, but engages with the wider city. It crams in a neat children’s section and some great gifts alongside the adult book offer; it’s a bookshop for today and tomorrow, rather than one that (as suburban stores sometimes do) looks back to a more golden past.

Breathlessly, I also put my head round the door at cool Greenlight (another strong Brooklyn indie), imaginative Idlewild (which blends travel and foreign presses with language tuition) and several others; much later, I lost myself in the mighty Strand’s 18 miles of books. Settling into an armchair in the rare book department, I may even have rested my eyes for a moment over an Al Hirschfeld compendium. I awoke with a start. I really ought to visit Barnes & Noble.

In fact, I saw three B&Ns: the old 5th Avenue store, something of a shadow these days; the Union Square behemoth, which felt understocked and short on character and, most interestingly, a relatively new store on the Upper East Side, at 86th and Lexington.

This felt like this year’s model; the old dark wood and the yellow/green décor remains in evidence, but parts of the book space are being repurposed for other categories – a large stationery department, a selection of gifts, the biggest range of jigsaw puzzles I’ve seen for some years, and a broad selection of toys and games. The old departments are present and correct – do CDs and DVDs really still merit that much floor space? – but the front of store was dominated quite rightly, by the NOOK e-reader.  This was my first opportunity to have a concentrated play with the various NOOKs, still only available in America, and I found them a better experience than the Kindles and Kobos I’m familiar with. Will the NOOK come to a certain UK book chain? I certainly hope so – we need it here.

What really warmed my old heart, however, at this semi-suburban B&N and indeed at most of the stores I visited, was a single fact: they were busy. Most of them were fully engaged in online and e-book selling; all of them ran lively events programs, regularly updated blogs and spoke to and for their customers. New York City is uniquely fortunate to have the exceptional density of population that supports so many thriving businesses. Long may all of them continue to flourish.

Philip Downer is the owner of retail consultancy Front of Store. He is a former CEO of Borders UK and writes regularly on retail and publishing. His e-book, A Year at Front of Store: 2011 in Books and Retailing, is available from the Kindle Store.

DISCUSS: Should Barnes & Noble Drop Bookseller from Its Name?