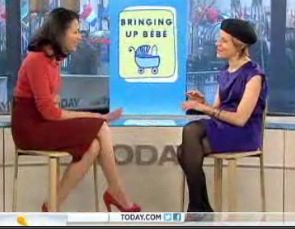 First, let me preface this piece by saying that I do not have any kids. So, I can be somewhat objective when discussing how Americans raise their children. I agree that shows like “Super Nanny” wouldn’t exist if we were all doing a bang-up job with our progeny, but since this debate doesn’t tend to involve me, I try to stay out of the mommy-melee. Until this week…

On Tuesday, I watched the segment on “Today” for a new book called Bringing Up Bebe by Pamela Druckerman. Watch here:

First, you must ignore the fact that she’s wearing a beret through the whole segment, which I found distracting. But, once you do that, you realize that she’s suggesting that French parents have some kind of Zen connection to their children that Americans simply don’t possess. We can’t get our children to eat vegetables. We aren’t calm. We don’t take time for ourselves.

Yes, I have often sat with friends of mine who are wrestling with 3-year olds and thought, “Hrm, is that the best way to handle this? Why don’t you just say ‘no?'” And, I do urge my mommy friends to take time for themselves, but with working full-time and raising kids, that can be incredibly hard. But, that isn’t what Druckerman is selling.

This story smacks of an ex-pat dissatisfied with American culture cloaked in a book claiming to have practical advice for parents. That I just can’t stand.  Yes, American culture is often more focused on “work” than “life.” Yes, Americans tend to want to give our children all of the benefits of life while also providing discipline, which can be a tricky balance, but that doesn’t mean that we don’t have common sense, which is the only advice that Druckerman really gives throughout the book.

I allow Druckman her opinion, but all French children are not so astonishly well-behaved. I know a couple of French children who aren’t. Just like all American children aren’t thugs. All American parents aren’t pushovers or task-masters vying for Ivy League schools either. I’m happy to hear her story, but to tout her as some sort of expert or even a sociologist who discovered something unique about French children that American children don’t have and preaching to American parents instead of simply citing this as a memoir of her experiences is sort of ridiculous.

Parents, do you need some help with your kids? Let me recommend two books instead of Druckerman’s: The Price of Privilege by Madeline Levine and The Biggest Job We’ll Ever Have by Laura and Malcolm Gauld. Out in 2002, The Biggest Job We’ll Ever Have actually gives a lot of advice to parents very similar to that of Druckerman’s…but it’s written by two Americans.