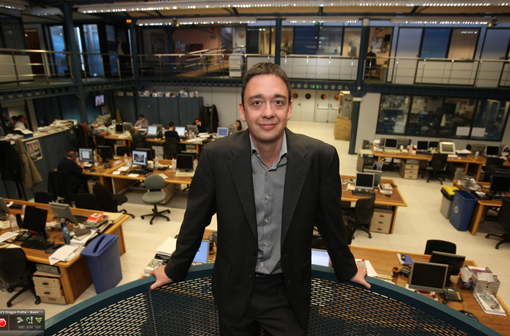 To succeed, the digital imprint had to be fully autonomous from the bread-and-butter core business: paper books.

BARCELONA: In a recent memo to publishers on GigaOM, award-winning journalist Matthew Ingram asked a painful question: Remind Us Why You Exist Again?

Catalan publisher Ernest Folch has been preparing an answer, although it is partial and in ongoing review… Folch has served as Editorial Director of Ediciones B — a privately held, medium-size trade publisher of best-selling popular fiction and non-fiction — since February 2011. He launched their digital imprint, B de Books, last November, making them the first commercial and profit-driven publisher to offer DRM-free e-books. Prices started at 0.99 euros, a bold step in a market where the tight-lipped agreement is that e-books can’t be priced below 70% of the full price of their paper counterparts.

“To carry out B de Books, we didn’t need a huge investment, but above all a consistent project and a way to explain it. The story we were going to tell, both inside and outside the company, had to be a great story,” says Folch in an interview.

Maybe the most important decision made by Ediciones B was that their digital imprint had to be fully autonomous from the bread-and-butter core business: paper books. “The dynamics of marketing, pricing, distribution and merchandising are different, and had to be so independent that we could allow ourselves to go on, even if they collided with our traditional business,” he says, admitting that this first step was excruciatingly difficult, “We needed to reinvent ourselves. It was almost an ontological chore.” The second step was to establish how they would position themselves in the new medium. “Low prices, DRM-free books, having a presence on every platform without offering preference or exclusives, and generating content in non-traditional environments” were all central to the project. “Self-publishing is a burgeoning reality online and B de Books had to embrace it. As digital publishers, we can’t act as gate-keepers any longer. Our new mission is to be facilitators.”

Once the story was ready, it could spread beyond the Barcelona central quarters to agents and authors. Literary agents, often identified as the instigators behind high e-book prices, “haven’t put any limitations on our future experimentation with flexible pricing of our e-books,” says Folch. “I think that the process is the other way round. When an agent sees that you have a consistent project, they are eager to negotiate and be part of what’s new.”

When hunting for viable self-published authors, Kindle Direct was a priority. “We signed in John Locke, both for digital and paper, in a few hours.” Other KDP authors now with B de Books include Spaniards Bruno Nievas, Cesar García Muñoz, Armando Rodera and Fernando Trujillo, and the Peruvian author Blanca Miosi. “We are negotiating with many more,” confirms Folch, whose non-traditional approach has garnered a huge amount of press attention. The opportunity offered by Folch was to help these authors break free from being locked-in to a single platform, such as Amazon’s or another. “With us, they will be present with every retailer,” remarks Folch, complying with his new role as facilitator.

Ediciones B is also converting their backlist to digital to be included in B de Books. “The backlist is essential to gain volume and scale. It’s not enough to [just] say that you are embracing digital.”

B de Books has been conceived as a startup inside a traditional publisher. They have a dedicated PR and communication person and a staff of three. “I can’t tell you more about our internal organization,” says Folch, explaining. “I wouldn’t like to give all the clues to our legitimate competitors.”