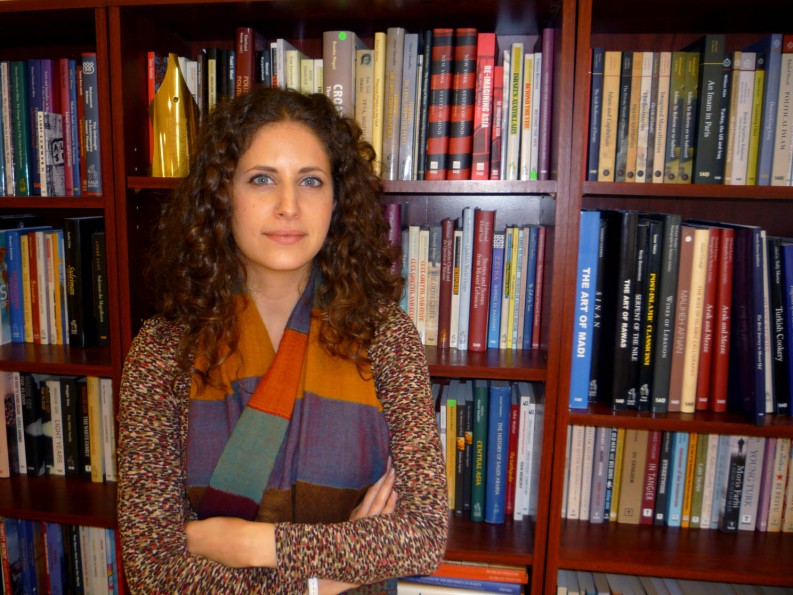 LONDON: It is energizing to be around Lynn Gaspard, the 28-year-old publisher of Telegram Books, the fiction imprint of the London and Beirut-based Middle East specialist publisher, Saqi Books. She’s up and at the shelves to fetch another title before you’ve had a chance to register the first one, and she fizzes with the youthful energy of the student protester she once was.

Now Gaspard, who was born in Beirut, has launched The Westbourne Press, a new trade non-fiction imprint, the plan being, as she puts it, “to publish books on the big issues close to my heart. People might say it’s a bad time to be launching a new imprint, but I think you’ve got to be optimistic. You’ve got to go out there and face it. I do think there is a market for informative, engaging, well-written books. We’re still taking risks, still publishing titles like Unspeakable Love: Gay and Lesbian Life in the Middle East. We are a minorities’ publisher, unashamedly progressive.”

Westbourne’s first title sets the tone: Sex and Punishment: Four Thousand Years of Judging Desire, a history of sex and the law by US writer and lawyer Eric Berkowitz. The Saqi “family” are not afraid to tackle difficult subjects like this, a fact that makes Gaspard smile: “Most of our books are banned in at least one Middle Eastern country,” she observes. The London Times once said: “Anyone interested in Arab culture in London is aware of the invaluable role Saqi plays…in making available pioneering, specialist and often controversial books that large publishers refuse to go near.” That remains true to this day. The Saqi publishing family leans to the left and has published books on Hizbullah and on Arab attitudes to the Holocaust.

Would Gaspard publish a title supporting Israeli settlements on the West Bank? She pauses. “We publish titles about Jews, and other minorities, in the Arab world and we will publish After Zionism later this year, on the one-state solution. I believe it’s important to document things that are historically important — like bin Laden’s speeches, for example — but if someone’s writing a book in which you are disregarding another people, then no, I don’t want to publish that.”

The collective Saqi, Telegram and Westbourne story is best summed up by one word: survival. This is a company that has seen its warehouse in Beirut bombed by the Israelis during the Israel-Lebanon war in 2006 and has managed to maintain an independent bookshop in London’s Westbourne Grove (hence the name of the new imprint) in Notting Hill Gate when so many have closed. It is an impressive achievement, testament to the focus and vision of the company’s founders, Gaspard’s Lebanese lawyer father André and his childhood friend, Mai Ghoussoub.

Today, her father runs Dar al Saqi, the sister company opened in Beirut in 1989, and Lynn talks about both of them with understandable pride and affection.

“During the Lebanese Civil War they were members of the Trotskyist Revolutionary Party and set up medical centers and community groups in an attempt to keep the peace. Mai was badly injured when a shell hit the car as she was driving a wounded Palestinian to hospital. They moved to Paris, where Mai went to a specialist hospital. Soon after, Mai moved to London and suggested that they open an Arabic bookshop as there weren’t any at the time. The shop was established in 1979 and initially only stocked books in Arabic. They then opened an English section and eventually began publishing books on the Middle East.”

Saqi means “the water-seller,” an important figure in the marketplace, and the little drawing of one is still the bookshop’s logo. “It represents, water, life, knowledge,” says Gaspard. The Saqi name is well-known in the Arabic community for whom the shop is an important resource. Students and academics, as well as staff from the Arabic embassies close by, visit the store, and it also has its share of celebrity customers, among them Brian Eno, Damon Albarn and actress Maggie Gyllenhaal.

Yet for a long time, despite her background – or perhaps because of it – Lynn seemed more likely to join an NGO or political organization, rather than go into the family business. Radical protest was in her blood. She read Contemporary History at Sussex University where she was involved in groups like the Stop the War Coalition (opposed to the 2003 war against Iraq) and the Legal Observers Society. In 2005 she traveled to Israel and the West Bank “and decided that I was moving to Ramallah. But a family friend convinced me to take an MA in Conflict Resolution at King’s in London.”

While waiting for the course to start, she gained experience at Saqi Books and at Index on Censorship. This was the time of the Israel–Lebanon war during which she became disillusioned. “I’ve always wanted to make a contribution, and I realized that you could do that via books too. If you could publish a beautiful book – a novel or a piece of non-fiction – something that made people happy or opened their minds, then that was important, too. For example, we will publish Lebanon Adrift — a critical study of the country today — later this year, and I feel I am contributing as much by publishing that as by joining a political organization.”

Authors come to Saqi through connections in the Arab world where the Saqi name is well known; for Telegram she sees agents, receives unsolicited manuscripts and reads a great deal of titles in their original French. She is fluent in French and Arabic and spends time every year exploring bookshops in Paris, looking for titles.

When talking about their authors, Gaspard said “We’re one big family.” Telegram has published at least one cult author who may yet become a global bestseller – Andrew Kaufman, author of All My Friends are Superheroes. “It’s an adorable book people love, and the film rights have been sold, so fingers crossed…”

Meanwhile, does the subject matter of some of their books affect the company’s relations with the authorities or business? “Occasionally, our books are banned in Beirut, where they are printed. In those cases, we have to be creative and find ways of getting the books out of Lebanon to sell them. In one instance, we were forced to literally tape pages together so that the authorities would allow us to ship them out of the country. We’ve also, but rarely, received death threats, for publishing extracts of the Qur’an in one of our language books say, and both my father and Mai Ghoussoub have been targeted on al Qaida websites. But I think that if you are in our business and publish the books that we do, this isn’t so unusual.”

DISCUSS: When it Comes to Politics, Where Should Publishers Draw the Line?