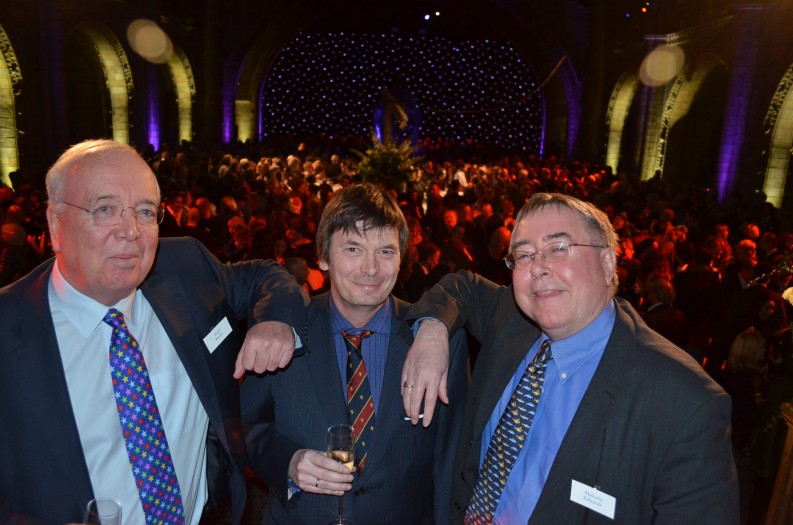 The UK’s Orion Group hosted a double celebration in London this week since its annual Authors Reception was also the publisher’s 20th anniversary bash. Orion’s founder, Anthony Cheetham, was among guests in the splendid, cavernous entrance hall of the Natural History Museum where he watched the current Chief Executive Peter Roche climb the stairs to propose a toast to the writers who have made the house the success it is. Dozens of them swirled around the famous Diplodocus skeleton below, including two who were there at the very beginning, Lady Antonia Fraser and Ian Rankin. “There are similarities between today and when we started the company in 1992,” said Roche.  “Then, as now, the UK was in the grip of a recession. Yet Orion survived and prospered through the stability and flexibility of its management, and thinking quickly on its feet. “Print is still the core of our business,” he continued. “But the ebook is here to stay.  We publish all our new books digitally and around 90% of our backlist. By the end of the year, we hope to have digitised 100% of our backlist. Who knows what the world will look like after the next two decades – right now they are probably developing the kit to put words quite literally on to the palm of your hand so that you can read without a device.  But we need authors – the future is in your words.”

Speaking on behalf of the authors – who included historians Antony Beevor and Andrew Roberts, and Wolf Brother creator Michelle Pavor –  Ian Rankin said: “There is an insatiable appetite for stories – stories that are well edited, well proof-read, expertly packaged and marketed and sold in great bookshops by people who are avid fans. Authors need publishers more than ever, particularly in a world where it is easy for so much to be published and where so much of is of varying quality. Which is why I have just signed a new two-book deal with Orion today and why I count many people there as dear friends.”

The Natural History Museum’s entrance hall has been used for many literary events. It was here that Michael Crichton saw Jurassic Park celebrated, and it is here that the UK’s Bookseller magazine sometimes has its industry awards. But its book connections go back further and in fact stare you in the face – or do, if you look up.

The famous Diplodocus’ full name is Diplodocus carnegii. It was donated to the museum in 1905 by the Scottish American industrialist Andrew Carnegie in whose name the Carnegie Medal for an outstanding book for children has been given since 1936. Carnegie’s experience of using a library as a child led him to resolve that “if ever wealth came to me that it should be used to establish free libraries.”

He went on to establish more than 2800 libraries across the English-speaking world and, by the time of his death, more than half the library authorities in Great Britain had Carnegie libraries.

Which only makes one wonder what he would make of the hardships currently faced by the UK’s blighted library service today.