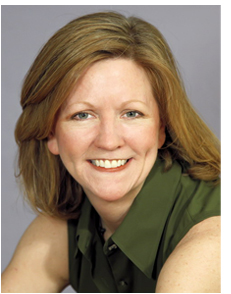 The latest in our occasional series, “Publishing People We Appreciate,” looks at Jennifer Brown, critic, editor, and children’s book crusader.

Jennifer Brown was eight years old when she landed her first monologue in a Kalamazoo, MI, community theater production of A Christmas Carol. She played Fanny, Scrooge’s sister. She had memorized not only her part, but the lines of every other actor. It wasn’t just the acting she loved, she says. It was the ensemble quality of theater itself—the backstage camaraderie, the dressing-room confessions. Today this children’s editor of Shelf Awareness, the e-newsletter for the publishing trade, she maintains her ties to the theater as a member of the Blue Hill Troupe in New York City, a well-respected company now nearing its 90th year. She performs songs like “Losing My Mind” — a tune most mortals leave to the professionals.

A Crusader for Great Children’s Books

But much of the time, Jennifer Brown is doing that other thing that she does exceptionally well—serving, in her own words, as “an ambassador for great books for young people.” For years she’s written impassioned reviews and opinion pieces for Publishers Weekly, School Library Journal, and Kirkus. She’s sat on one children’s book awards committee after another, most recently playing a key role in the selection of Walter Dean Myers as the national ambassador for young people’s literature. She’s a voice of reason when the going gets tough, as when, for example, Megan Cox Gurdon suggested in the Wall Street Journal that too much darkness has fallen over the land of YA. And every week she guides parents to new books through her popular website, TwentybyJenny.

Children’s Book Ambassadorship wasn’t the destination Brown had in mind as a young graduate of Princeton University. She was an English major, a woman dead set on acquiring and editing adult trade books. What redirected her career was a conversation she had with William C. Morris, a long-time Harper executive who reinvented the way publishing houses interact with teachers and librarians.

“There were Wild Things dolls on the guest chairs in his office,” Brown recalls of her first meeting with Morris. “The six flags of Texas were on his bookshelf. He talked about the importance of children’s books and offered me a job as his assistant in library promotions.” It was the summer following Brown’s college graduation. Bill Morris would remain Brown’s mentor for the rest of his life.

With Morris’s support, Brown would find her way into a series of roles at Harper (including leading Trophy Paperbacks) and develop firm ideas about what mattered in books for the young. Even when she left Harper to take a job as an elementary school teacher, she kept her hand in the business—doing both editorial work at night and work on the annotated catalog in the summer.

It was her years as a teacher (kindergarten through third grade) that helped Brown gain a more-than-merely-intuitive sense for what makes a book sing for younger readers. “Often the connection between a child and a book is immediate,” she says. “The layout of the pages is key — a respect for what a child of a certain age is ready to receive. It’s also important, I think, to never underestimate how quickly kids develop a sense of humor and how, with older readers, irony becomes essential.”

But Brown’s grasp on the world of books for younger readers goes far beyond the picture book or early readers. She’s particularly intrigued, she says, by all that is happening in teen fiction.

“Teen readers today are so plugged in and so savvy that their tastes and expectations require more from young adult authors than ever before. It’s also a scary time to be a teen, thanks to access to information and the speed at which news — both global and personal—travels. Being a parent today means striking a delicate balance between the need to be both supportive and protective and the need to allow for independence.”

Many parents in this environment feel the need to pre-read the books their children discover, Brown notes—a tendency she fully understands. But Brown also believes that children set aside those books that they are not yet ready for…and that it’s imperative to keep providing book observations and resources to parents, teachers, and librarians who need to be sure that a full range of possibly right books are available to teen readers. E-newsletters such as Shelf Awareness play a key role, Brown suggests, in keeping such doors open for teens. Prizes help point the way.

Foreign Books as an Aid to Understanding

Among the books that can broaden a teen’s view are those originally published in other countries and other languages. Brown points to the value of a book like Josef Holub’s An Innocent Soldier, the winner of the 2006 Mildred L. Batchelder Award, which, she says, helps American readers understand the consequences of a foreign war. Brown was a member the selection committee that year. Books like these help young readers look at the world differently, says Brown. And if foreign books are properly translated, children don’t just learn about the big concepts or the historic events; they learn to value the nuances of cultural differences.

Given the encyclopedic nature of Brown’s knowledge about children’s books—both how they come to be made and how they are read — one might imagine that Brown herself would be at work on a book about, well, children’s books. She sighs when asked the question. Other projects preoccupy her, she says. But more than that, one gets the sense that Brown is eager, at least at this time, to keep reading the books that others write so that she can keep sharing their value with the many who rely on her opinion. It’s a sacred trust, a contract of sorts, when you say, I love this book, and if Jennifer Brown has in the past fallen in love with many books, she’s more than ready, it is abundantly clear, to fall in love all over again.

Beth Kephart is the author, most recently, of You Are My Only, named a best of the year by many bloggers. Her 14th book, Small Damages, is due out from Philomel next July, and she is at work on a book about the Berlin Wall. Please visit her blog.

DISCUSS: Who Do You Appreciate Most in Publishing?