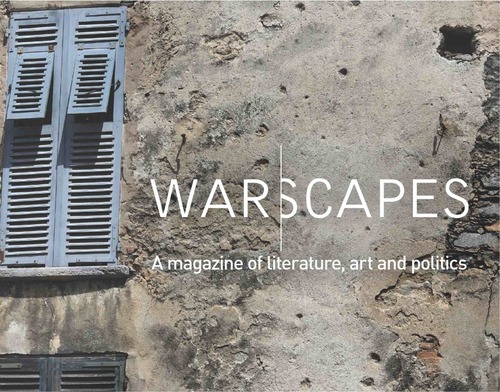 Warscapes is a new, attractively designed online magazine about conflict. Conflict, you might groan, don’t we hear enough about conflict? Yet Warscapes — with sections that include literature, poetry, art and reportage — treats the subject elegantly by publishing stories that underline the personal, the intimate and the introspective.

Writer, filmmaker and journalist Michael Bronner co-founded Warscapes in New York last November with Bhakti Shringarpure, a writer and academic who focuses on literature emerging from civil wars following European colonialism. The magazine is “specifically dedicated to providing a lens into current conflicts, especially those that are underrepresented (or not represented at all) in mainstream publishing and media. We search for voices that convey the realities of life amid conflict — perspectives of intimacy and integrity. We hope to enhance understanding of specific conflicts and, less directly, of conflict itself.”

With an impressive advisory board that includes Somali writer Nuruddin Farah, Addis Ababa-born novelist Dinaw Mengestu, Indian MP and writer Shasi Tharoor and Iranian-Canadian journalist and filmmaker Maziar Bahari, Warscapes operates as a non-for-profit magazine, relying on contributions, and the founders have applied for foundation grants.

“We are very lucky to have an advisory board of diverse and kindred spirits,” said Bronner. “For example, Congolese novelist Emmanuel Dongala wrote an extremely moving personal narrative — Hollywood, Pirated Videos and Child Soldiers — specifically for Warscapes about his experience navigating a treacherous checkpoint. Anne Nivat, the renowned French war reporter, allowed us to publish the first-ever English translation of her new book, Fog of War, in the reportage section. Zimbabwean publisher Irene Staunton provided invaluable guidance and contacts for our Zimbabwe Retrospective, currently running on the site…”

Part of what makes the magazine so accessible is the wide variety of what it has to offer — excerpts from novels, interviews, slideshows of paintings or photographs or reviews.

Bronner said: “We take a broad view in defining the term “warscapes”; for example, we’ll be running a piece looking at the phases of conflict in Iraq through the lens of a reconstructive surgery project that helps heal those who have been caught in the crossfire. We recently ran a fantastic interview with Shobasakthi, a former child soldier in the Sri Lankan civil war, to accompany an excerpt from his novel, Traitor. In addition, we have more traditional, long-form reportage, such as the piece currently featured from Libya.”

To give readers a taste of Oumar Farouk Sesay’s poetry on the Sierra Leone civil war here are the first few lines from his Poems of things and other things: “A littered mind/A disused thought/A muffled song/A caged bird/A pregnant mind/A failed state…”

DISCUSS: What Do War Bestsellers Say About Our Society?