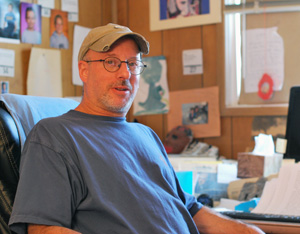 “If we were to provide literary fiction to the broadest audience possible, that included distributing it to people electronically.”

In 2007, Publishers Weekly hailed Dzanc Books as “the future of publishing” — even though they only had one book in print at the time. Since then Dzanc has gone on to become one of the leading independent presses in America, with a wide roster of prize-winning and critically acclaimed authors on its list. Recently the publisher launched its ambitious rEprint series, dedicated to rescuing lost works of literary excellence from the threat of oblivion. Publishing Perspectives‘ Daniel Kalder spoke to Dzanc co-founder Steven Gillis about the series, digital books, the pursuit of literary excellence and the importance of “leaping”. “We [Gillis and publishing co-publisher Dan Wickett] started Dzanc seven years ago, and early on we saw that so much that used to happen in physical print was now happening online. The way people read was changing. For instance, reviews were shifting online, so we invested ourselves heavily in that online reviewing community. So when other publishers perceived the e-book as fad, we knew that it wasn’t. We knew that if we were to provide literary fiction to the broadest audience possible, then that included distributing it to people electronically.”

Thus while mainstream publishers and more established independents were agonizing over the threat to their traditional publishing model, Dzanc embraced the new digital medium and began publishing e-books simultaneously with their print editions. They rapidly developed a skilled conversion staff and insisted upon a high standard of design for their e-books. The response was strong, and Gillis could see that the e-book market was growing exponentially — and then he asked himself a question:

“Why limit ourselves to just putting out a handful of print books each year? I wondered. So we had the idea — why not look into all the great works of literary fiction that were published before digital publishing existed and bring them back as e-books?”

And so about three years ago Gillis and Wickett drew up a list of authors whose work they admired and began contacting them to see if they would be interested in having Dzanc publish their older work in digital format: “We contacted scores and scores of people, everyone we had respect for. [NBA nominee] Noy Holland and [NEA Fellowship winner] Stephen Graham Jones came quickly. Some authors had to check their contracts. The easiest were those authors who owned the rights and said ‘here you go’ or told their agents, ‘I want to do this.’ The worst is when the agents can’t decide…”

Dzanc was offering an attractive 50/50 deal on royalties from sales of e-books. The response from the authors they contacted was almost universally enthusiastic. Titles published before 2000 were usually easy to acquire as there were no contractual issues tying up e-book rights, since digital publishing in those days was not yet a serious proposition.

It was a simple idea, and yet one that apparently nobody else in publishing had thought of — Gillis kept expecting other firms to start competing with Dzanc for e-book rights but for about two years he had the field largely to himself: “Finally other publishers are getting involved. I see this as a sign that our idea was proven correct.”

One of the authors Dzanc is publishing in the rEprint series is two times NBA nominee and Guggenheim fellow Stephen Dixon, who ended up giving them 24 of his 28 published books (the rights to the others not being available):

“I was delighted when Dzanc wrote me that they wanted to publish whatever book of mine I could give them, as an e-book,” says Dixon. “I’ve mostly been published by independents. My last big publisher was Henry Holt, which published four books of fiction of mine and also reprinted my novel Frog in softcover. The last hardback they published of mine, 30, was in 1999…. if it weren’t for independent book publishers, I wouldn’t be published or not as much.”

Dzanc has also acquired the entire 15 title backlist of film critic and author Jonathan Baumbach, who states: “I think independent publishers are doing a better job than traditional publishers in doing work with literary merit.”

“We’ve signed close to 500 titles,” says Gillis, “But we have way more in our sights. By the end of 2012, all of them will be out and available. We have our fingers crossed on a lot of people — in some cases we’ve been waiting for two years.”

Gillis is a self-described “leaper” with a missionary drive to bring quality literary fiction to the widest audience possible. One of Dzanc’s marquee signings is the Nobel Prize winner Nadine Gordiner, who gave the publisher six titles on her backlist, to be released in 2012. “Surely that was persuasive for the hold-outs?” I ask. “You’d think,” says Gillis. “But you’d be surprised…Amazon are hard to fight since they’ve started getting involved in the publishing end. But that’s a deal with the devil — if they produce your e-book then they get exclusivity, so you have to stick with Amazon. But they dangle the cash, and agents think ‘Maybe that’s the best deal…'”

Nor is Gillis impressed with efforts by certain agencies at setting themselves up as publishers, a clear conflict of interest in his view. He is also baffled by the failure of other independent houses to capitalize on the potential of e-books, and who instead insist on printing expensive hard covers which they hope will somehow find an audience:

“We’ve approached some of the other independent houses, and offered to partner with them. We tell them, you don’t have to put our name on it, you can publish it in your name, just pay us a fee to set it up and off you go. We’ve got the distribution, the conversion staff. But they can’t make up their minds. I think they fear that e-books will undercut print. But market studies show that it’s different readership. And it’s so much cheaper! There’s much less risk — if I publish book in print then all the distributor and print costs are up front. With an e-book I can produce it for $150, instead of $3,000 to run off so many physical copies. E-books are here, they are happening. I’m a leaper, I jump in and do it. I just don’t know what to do with these other publishers…”

Those who hesitate now are increasingly likely to miss out in the future, says Dawn Raffel, whose Further Adventures in the Restless Universe was published as a paperback and e-book by Dzanc in 2010 and whose 1995 collection In the Year of Long Division originally published by Knopf will appear in the rEprint series later this year:

“Dzanc’s strategy of acquiring e-rights to literary titles is brilliant; they’ve found a hole in the marketplace. Traditional publishers have been slow to see the value not only of e-publishing but e-marketing, with the indies way out ahead in the blogosphere. This has allowed Dzanc and other independent presses to pick up some great books, not just for reprint but for original publication….About a year ago, I read a piece in Vanity Fair about the publication of Catch 22. Jason Epstein, who was a very young editor at the time, was passionate about the book and, with the help of a colleague, was able to override the concerns of more senior editors who were opposed to publication. That wouldn’t happen now. The big publishers won’t take a risk, but the independent presses will—and some of those risks will pay off.”

DISCUSS: Are We Verging on a Digital Rights War?