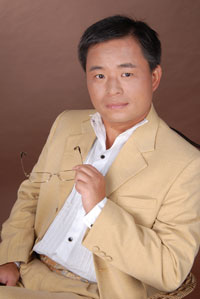 As China continues to crack down on dissenting voices coming from outspoken intellectuals, Murong Xuecun, one of the country’s most popular writers, is managing to balance on the tightrope between speaking out against censorship and the country’s political system, and remaining free to continue his writing career which has flourished ever since he distributed online his first novel, Leave Me Alone: A Novel of Chengdu, ten years ago.

Murong’s voice is relatively new to the dissident arena — he began publicly criticizing the government only about a year ago, when one of his closest friends was arrested on charges of inciting subversion.

Although he had always written about problems in contemporary society, his social consciousness began about two years ago, said Murong, in a recent interview in Paris, where he was seeing his French publisher, Gallimard, with his agent, Sharon Galant of Zeitgeist Media Group.

The social awakening Murong was referring to occurred during his research for The Missing Ingredient. He went undercover for several weeks to report on a mafia-type pyramid scam in a highly industrialized southern Chinese province. The ensuing book focused on the cruel inequalities that go hand in hand with the country’s breakneck development. On the day of the prize ceremony in Beijing, Murong was banned from speaking but his acceptance speech on literary freedom, which he immediately posted on the Internet, was subsequently published in newspapers and on websites around the world. Then last fall Murong, along with other writers, attempted (and failed) to visit Chen Guangcheng, the blind activist lawyer under house arrest. He wrote about his experience for The Guardian newspaper.

“Sixty years of education has resulted in two generations of efficient brain washing,” said Murong, 39, whose real name is Hao Qun. “There are several groups; the first wants more rights and a democracy. Internet makes them realize that there is a difference in human rights between China and other countries. Another one is nostalgic for the Mao period when they were poor but there was no corruption. There are also people who want to go back to Confucianism and follow a regime similar to Singapore’s — an enlightened dictatorship.”

Murong studied to be a lawyer, writing poetry and short stories on the side. In 2002, while he was working as a legal advisor for a company in Guangzhou, he began posting chapters of his first novel on the in-house internet forum. What became Leave Me Alone: A Novel of Chengdu was a page-turning account of gambling, drugs and sex in modern-day urban China, which became an instant success, attracting five million readers online. Murong had unwittingly built a huge fan base and his novel was consequently published by major Chinese companies and translated into English, French, German, Vietnamese and will soon appear in Portuguese. Following its translation into English in 2008, it was longlisted for the Man Asian Literary prize. Since then Murong works as a full-time writer and has published three more novels and his work of non-fiction.

Murong, who admires Stephen Hawking but equally William Faulkner, Ernest Hemingway, Graham Greene, Albert Camus, and François Mauriac, writes about “what is on my heart.” This is often a description of the grim underbelly of Chinese society undergoing cutthroat, capitalistic development. While he is very happy to see his books published in other countries, he said, publishing in China is just as important for him. Unlike some Chinese authors who chose only to be published abroad, he would like to continue to be published both in China and in translation. In order to get around censorship, which he said is at times random and senseless; he will often publish two versions of a novel—a more complete version in Internet form, while the print editions will be censored. Sometimes after censors have approved a first print run, a publisher will slip the novel in its complete, uncensored form into the second edition. Murong’s agent, of course, presents his complete manuscripts to foreign editors.

But one of the biggest problems for Chinese writers is self-censorship, said Murong.

“It’s something that haunts me when I write…sometimes when I read over a text I realize that I’ve already modified it.”

There are words that Murong “hates. They are propaganda words that come back to me that were part of my education, like saying ‘down with so-and-do’ — a whole generation of Chinese is under the influence of these words of the Cultural Revolution…our biggest problem is not creating a new vocabulary but being aware, as writers and not using words used by the state.”

Like many authors in countries where there is censorship, he is used to choosing words carefully. 1989, the year of the Tiananmen Square protests, is a year to be avoided. June 4, the day military action took place, can, for example, be changed to May 35th, said Murong. On the internet people are even more creative, he added, “There are many terms to say the government is watching.”

Murong’s Sina Weibo account, the Chinese equivalent of Twitter, has 1,270.000 million followers and Murong spends a few hours a day reading and commenting on it.

Now at work on a love story, Murong will travel to the UK later this year with the British Council following the London Book Fair where China is this year’s Market Focus. He continues his delicate balancing act between speaking his mind and hoping the authorities will leave him alone. In the end, he is confident that China will become a democratic society. “Eventually it will get there, after a long and painful path.”

DISCUSS: What is the Bigger Crime, Censorship or Self-censorship?