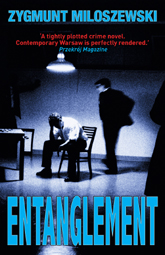 At various times since the fall of the Iron Curtain there have been outbreaks of fear that hordes of criminals would cross the Czech, Polish, Slovak, Slovene and Hungarian borders to pillage the wealth of Western Europe. In 2012, it looks as if this long awaited crime wave is actually coming to pass, though in the form of premium quality crime fiction.

Crime writing is experiencing a renaissance throughout Europe, with City University in London having just started the country’s first MA program in the specialty. And while European crime fiction instantly brings to mind a long British tradition and recent Scandinavian sensations there are a number of increasingly well-known writers from Central Europe whose work is making its way to English-language readers on both sides of the Atlantic.

At the end of January, Budapest Noir by Hungarian writer Vilmos Kondor was published by HarperCollins in the US. The novel is set in 1936 and brilliantly ties the murder of a Jewish prostitute to the political atmosphere of a Hungary becoming increasingly close to Nazi Germany. Kondor’s writing itself is a throwback to the classic era of detective fiction in which the story is set and is reminiscent of the twisted intrigues tying underworld to high politics found in the novels of Dashiell Hammett. Budapest Evening’s crime reporter, Zsigmond Gordon, plays the role of the jaded yet good-hearted pursuer of justice.

The Hungarian editions of the next three books in the series have already been published. The rights to the second book, Budapest Sin, have been sold in Germany, the Netherlands and Italy. Each book takes up the adventures of Gordon in successive periods of pre-war, wartime and postwar Budapest.

Another major contributor to the current literary crime wave comes from just east of Central Europe. Ukrainian writer Andrey Kurkov’s Death and the Penguin and Penguin Lost have opened a singular window on the often sinister world of post-Soviet crime. Penguin Lost was published in September 2011 as part of the Melville International Crime series and continues the picaresque adventures of failed writer Viktor Zolotaryov as he navigates a world where immense wealth and privilege often go hand in hand with violent and certain death. The next Kurkov title being published by Melville House Books is The Case of the General’s Thumb, coming out next month. It is a novel which paints an even darker picture of the blurred lines existing between lawmakers and lawbreakers in modern-day Kiev.

In the UK, Kurkov’s writing is even more established, with Harvill Secker having published seven of the Ukrainian writer’s books, the most recent being The Milkman in the Night.

The main culprit in the region’s crime wave is Poland, where two new series are taking hold on British and American shores.

Melville International Crime will be introducing American readers to Marek Krajewski’s criminal counselor Eberhard Mock and his city that straddles the German-Polish divide as pre-war Breslau and postwar Wrocław, along with the divide between the rational and irrational, and even the natural and supernatural.

Three books in the series – Death in Breslau, End of the World in Breslau and Phantoms of Breslau – have been published by Quercus Books in the UK to great acclaim, with a fourth, The Minotaur’s Head, to be released in April. The latest Polish crime writer to make his way into English is Zygmunt Miloszewski, whose novel Entanglement follows State Prosecutor Teodor Szacki in a singular murder investigation that connects cutting-edge psychotherapy with the shadowy remnants of Poland’s still recent communist past. While Krajewski’s series takes advantage of the picturesque and fantastic possibilities of Poland’s history, Miloszewski deals with the trials and tribulations of modern, everyday life – troubled marriages, job stress and traffic jams, set off against a backdrop of brutality whose origins remain shrouded in mystery.

Miloszewski recently published the second book with Teodor Szacki as the investigator, titled A Grain of Truth. Bitter Lemon Press will publish the English translation of the novel in September.

Central Europe has also played a role in recent crime fiction as a setting for European crime writers from further afield. Philip Kerr’s latest installment of his Bernie Gunther series, Prague Fatale, takes the Berlin police detective to Nazi-occupied Prague for a manor house murder mystery among the guest of soon to be assassinated Reinhard Heydrich.

Amazon Crossing adds a Central European criminal to the mix with its just published novel by Icelandic writer Hallgrimur Helgason in The Hitman’s Guide to Housecleaning. The book follows accomplished Croatian hitman Tomislav Bokšić, dubbed Toxic, as he escapes from New York and his Mafioso life and in attempting to get back home ends up in Iceland to comic effect.

Whether the titles prove as appealing as their Scandinavian brethren remains to be seen, but several of the books have the qualities that could make them into cross-over hits. And now, with so many finding their way into English translations, readers will be able to choose for themselves.

Michael Stein works as a journalist/writer in Prague where he started the blog literalab in December 2010, which focuses on Central and Eastern European writing. He has written for a number of European and American magazines. His literary and cultural articles have been published on Czech Position, Publishing Perspectives, Readux, Absinthe: New European Writing and other publications. His fiction appeared most recently in The Medulla Review, Drunken Boat and has previously been published in journals such as McSweeney’s, Pindeldyboz and Café Irreal among others.

DISCUSS: Which Country is the Next Big Thing in Crime Fiction?