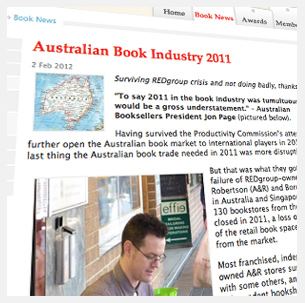 Booksellers New Zealand has published a brief report on the 2011 Australian book industry that details some of the major developments, particularly in bookselling.

Australia’s book industry weathered some major disruptions in 2011, most importantly the closure of REDgroup-owned bookstore chains, Angus & Robertson and Borders. The report says that 130 bookstores closed, leading to a 20% loss of retail space.

But there was a bright side for independent bookstores. Australian Bookseller Association CEO, Joel Becker, said some bookstores reported 10-30% sales increase over the holiday period.

Also in 2011, the Book Industry Study Group (BISG) made recommendations to the Australian government on how to deal with inequities in the industry. BISG recommended “a shorter time allowed for publishers to make new titles available on the Australian market following their launch in other markets before parallel importing is legal.” They also argued for a supply chain that would enable Australian booksellers to compete internationally, and for government assistance to booksellers in the amount of $5 million.