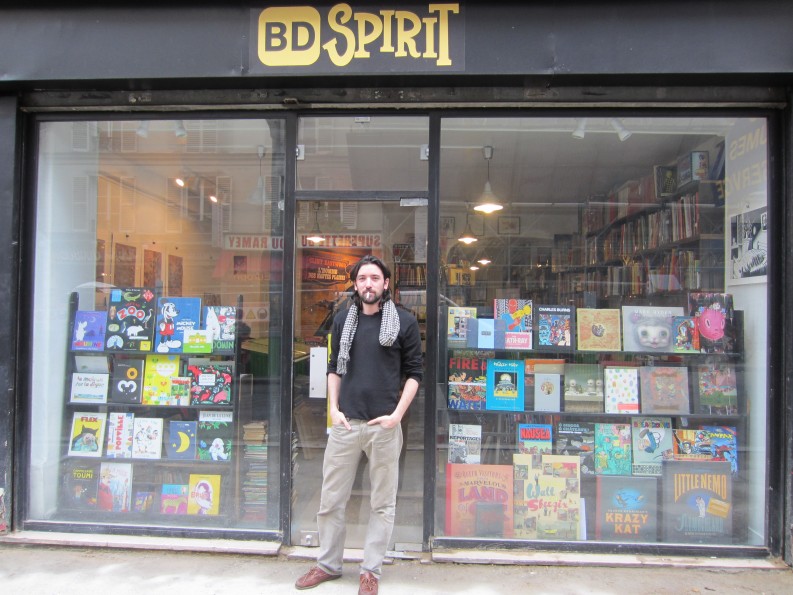 “Most bookshops only have what’s been around for 15 years…people don’t revere the old comics enough.” Manuel Morin in front of his extraordinary bookshop

PARIS: Tucked away from the throngs of tourists in Paris’ Montmartre, there might very well be the greatest comics bookstore in the world. BD Spirit, its name an allusion to comic book legend Will Eisner’s character, is a proud caretaker of the history of comics, or BDs (Bandes Dessinées) as the French call them. With an estimated stock of 50-80,000 comic books and magazines, many of them out-of-print collector’s items, this is not your ordinary bookshop.

“We don’t carry books that just sell well. Our positioning might be a little severe, but we want our books to fit into the history of comics,” said Manuel Morin, owner and co-founder of the shop, who has also served as a member of the Grand Jury at the renowned Angoulême comic book festival, which just ended this past weekend.

Comics are a serious business for 30-year-old Morin, who has been collecting and dealing comics since he was a child. As a history buff and a passionate comic collector he has merged his two interests — he sees comics in the context of history, as a barometer for society. But he’s not too serious that he can’t have a few laughs with a client who is buying old Marvel comics with which he is wallpapering his bathroom wall.

An only child with parents who were intellectual Communists, Morin was left to read whatever he liked and he gravitated towards comics. “Culture was very important for my parents, it was a sort of ideology, that you couldn’t leave culture to the bourgeois.”

Bargain hunting and rummage sales were family hobbies and as a result Morin became interested in “whatever was old rather than contemporary.” Already as a young child he began to look at catalogs and publishers and searched for out of print comic books that were potential collector’s items. At eleven he started to sell comics to his friends’ fathers.

“You see, there’s never been a break in the thread of my reading,” stated Morin.

As a history student at university, Morin, who by then had a huge collection of comics, worked in a bookshop in the Montmartre neighborhood and eventually bought the business in 1998. There, a serendipitous encounter with an art history student, who lived across the street and had written her thesis on comics, censorship, and ideology in France and the US between 1934-1972, turned into a partnership in life and business.

Morin and Sandra Mezache started their company seven years ago, at first only selling vintage comics, and in 2010 moved to their current location where they sell a wide range of books and magazines in French, English and Italian. Morin prides himself on having the largest collection of Robert Crumb’s work in the world. Besides Crumb, Morin’s heroes (American or Japanese) include Will Eisner, who in the 1940s brought super heroes to comics, and Osamu Tezuka (http://tezukaosamu.net/en/index.html), considered the father of Japanese mangas and animation. The creator of Astro Boy, Tezuka drew more than 150,000 pages of mangas during his lifetime.

BD Spirit draws serious collectors from afar and a neighborhood crowd alike. It takes Morin less than five minutes to launch into the history of comics beginning with the Katzenjammer kids, called Pim Pam Poum in France, the development of the comic book in the US in the 1930s, and the use of super heroes as tools for propaganda during World War II and during the Cold War. Although Mickey Mouse came to France in the 1930s via Paul Winkler who owned a press agency, said Morin, comics really only developed in Europe post World War II, first with the Belgians and then the French, who had a good creative run in the 1970s and 1980s he conceded.

“The French [cartoonists] are interesting because of their cultural background but there isn’t really an underground movement here, they are mainly artists, whereas there’s still a big contemporary underground culture in America,” states Morin.

Morin and Mezache hold regular book signings, deliberately bypassing publishers and dealing directly with cartoonists. Comic book greats that BD Spirit has hosted include Frank Stack, who wrote under the pseudonym of Foolbert Sturgeon in the 1960s and is considered the father of the first underground comic book, “The Adventures of Jesus,” Aline Kominsky, part of the underground comix scene in San Francisco where she met and married Robert Crumb, the eclectic Gary Panter, and Canadian Marc Bell.

Morin also does a brisk business via mail order, selling to customers worldwide. He traveled to New York City last year to visit comic book shops and came back unimpressed. “Most bookshops only have what’s been around for 15 years…people don’t revere the old comics enough.”

Whether one is looking for out-of-print comics dating back to the early twentieth century or discerning contemporary graphic novels, Morin is happy to consult with clients who should keep in mind that he is “…passionate about comics that question things.”

DISCUSS: What Is Your Favorite Comic Book Store?