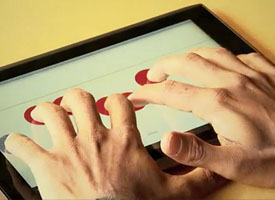 I’ve always thought that the one enhancement that would really improve the reading experience on an e-reader was some sort of “haptic response” — tangible, physical feedback when you turned a page, the very thing that would send those little sparks of serotonin to your brain as a reward system for finishing a page of a book. The technology is clearly not beyond the realm of possibility. Just consider the haptic feedback smartphone virtual keyboards offer and you’ll get the idea of what I have in mind. Reading is, after all, still a physical experience, and the “feel” of a book is important to many.

Writing too is physical. There are people like myself who consistently try new keyboards in an effort to find “just the right one” that will make my day at the computer that much more pleasant. While I’ve settled on a basic Mac wireless keyboard for my day-to-day, I do sometimes switch it out for a ‘bucking spring’ keyboard from Unicomp.

I was long fascinated by the idea of a ‘virtual keyboard’ long before the iPad. The tech has existed for sometime now. Around 2000 a physical, flat, key-less ‘virtual’ keyboard was introduced to the market. Though it sold for an extraordinary $300-400, it proved popular. Sales were mercilessly short-lived, as the potential of the tech was quickly realized by Apple, who quickly bought up the company and, it is said, eventually incorporated the code into the iPhone and iPad.

Then I saw what might look like the next step in virtual keyboards, the new Touchscreen Braille Writer for the iPad. The web site Trendcentral described it, as follows:

The app that orients a tablet’s virtual keyboard to a user’s fingertips, rather than requiring the user to locate it by touch. Unlike traditional screen reader programs, Duran’s app is a screen writer. It features a self-adjusting Braille keyboard of eight keys, with corresponding audio cues to confirm correct typing. If released, the program could ultimately supplant traditional Braille note takers, which cost upwards of $5,000.

The idea of using a sound cue to let you know you’ve hit the right key is fascinating, especially as we move toward more and more virtual keyboards. Of course, you can download a program like Typewriter Keyboard for your Mac to make you keyboard sound like an old keyboard, but what I have in mind is slightly different. What if developers could produce a virtual iPad keyboard that offered subtle different audio cue that sounds as you strike each different key, coupled with haptic feedback for each key strike. Now that might make for some truly interactive typing.