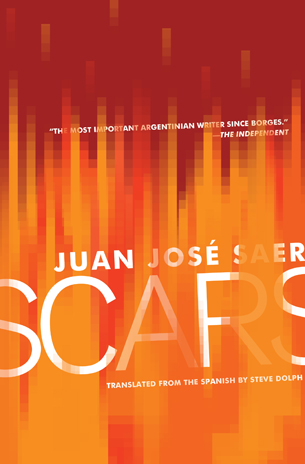 Luis Fiore just shot his wife in the face after a day of hunting with his family. This fictitious brutality serves as the plot hub for Scars, a 1969 novel by Argentine writer Juan José Saer (1937-2005) that was recently published in an English translation by Open Letter Books.

Four spokes radiate outwards from the novel’s murderous hub, each one comprising a stand-alone vignette with a different protagonist and a unique connection, some intimate and some remote, to Fiore’s crime. Other than the final section of the novel, which is told in the voice of the murderer himself, the other three sections revolve around their own unrelated events and distinct motivators. With this unique structure, Saer seems to be making the point that even the most dramatic event matters only to those directly involved in it. For the rest, the event is merely a blip in everyday life.

In a very brief space, Saer creates four distinct protagonists. In the novel’s first section, a young journalist struggles to write daily (usually fictional) weather reports while living with his irritable mother. In the second and third sections, a lawyer is hopelessly addicted to gambling, and a judge recognizes the meaninglessness of his life. Even the judge’s hobby of translating Oscar Wilde’s Dorian Gray into Spanish adds nothing to the world (“Whole passages come out exactly the same as the versions of the professional translators.”). In the final section, the novel telescopes into Fiore’s day of hunting and his fatal moment of misjudgment.

Scars is a beautifully-structured lesson in humility and perspective, accented with sparkling, if dark, humor. Dolph’s lively translation captures the underlying play and tension in Saer’s writing. I would have preferred more resolution of the distinct stories and less focus on hyper-realistic details (do we really need to know every turn the judge makes in his car on his way to the office every time he makes the trip?).  Nonetheless, Scars delivers the rare combination of entertaining suspense and thought-provoking, intelligent writing.