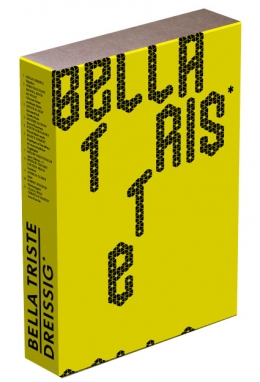 Last month, the German literary magazine BELLA triste won the Kurt-Wolff-Förderpreis, the first time in over a decade that the prestigious prize has been given to a magazine instead of a publisher. The Kurt Wolff Foundation noted the magazine’s “esprit, flair, and compositional elegance” in explaining its decision.

If you want to see all of those characteristics in action, you’d do well to check out the extraordinary 10th anniversary edition the magazine put out earlier last year. The editors wanted to do something different, so they decided that instead of printing in the issue as a normal magazine, each piece would get its own format — posters, a pack of cards, a doorhanger, etc. — all packaged together in a box. The result is a great example of how a small organization can put together an impressive project with the right insight and support, and of how a complex idea can fit organically with the basic principals of a publication. I talked with editor Victor Kumel about making the special edition:

PP: Why did you decide to take on a project like this?

BT: Very early on we decided against a retrospective self-adulation: a Best-of-BELLA would have been too boring for us. How it was we came up with the concept, I don’t know anymore. There are five of us editors, and we mostly talk over each other loudly, and when we brainstorm we always drink a lot of white wine. We wanted to go beyond the book, to open the literature up to other arts and media. We’re big fans of McSweeney’s. They’ve demonstrated really impressively for some time now what’s possible in the print medium. But in the end all of these great experiments are on the level of putting nice clothing on pre-existing texts. We didn’t want to force any formal gimmicks onto the texts, we wanted the text itself to seek out its genuine form, for its physical appearance to be an integral part of what it’s trying to express.

A running joke we used to motivate ourselves during the long work on the issue — especially in the difficult phases: We’re going to make Dave Eggers cry with this issue.

How did you find the resources?

BELLA triste is supported by various patrons that have seen the project through for years. For this special edition, the German Literary Endowment (Deutsche Literaturfonds) helped us.

What were the costs, in terms of time and money? The first brainstorming session took place a year and a half before publication. The intensive phase lasted about a half a year. For the postproduction, we had a team of helpers, 70 students from Universität Hildesheim. Without that great, enthusiastic team it wouldn’t have been possible to make this issue a reality. The postproduction was very involved since we had to work with over ten printers and manufacturers because of all of the customized designs. Many of the production steps we had to take on ourselves, simply because there’s no one who will do such strange tasks (at least not for any amount we could pay).

How did you work with authors to shape each piece, or even decide who was involved at all?

We spontaneously wrote to a rather large number of authors, telling them about our project. We didn’t ask for anything in particular; we were completely open for whatever ideas would come.

Author reactions to our query varied a lot. Many of them didn’t understand what we were talking about at all, or they sent us work that combined very conventional texts with illustrations. Others had been waiting for just such an opportunity. For example, Robert Wenrich has been experimenting for some time with poems written on multiple layers of transparent plastic, so that new meanings are created as you leaf through them. Until now there had simply been no opportunity to publish such a thing, nor did he believe that there ever would be.

Other people developed ideas together with our designer Andreas Töpfer. He and his inexhaustible inventiveness are to thank for the fact that ever piece found its form.

What kind of a response did you get to the issue?

We got a lot of positive, even enthusiastic feedback. Designers and book makers especially got the concept immediately. Many “traditional readers” were also confused. Some subscribers even sent their issue back because they didn’t realize that it was the new BELLA triste, and thought that the package must have ended up with them on accident.

But we wanted it that way. We intentionally didn’t include an introduction or instructions — every reader has to figure out the texts and have their own new reading experience themselves. We only want to say: Yes, it is a literary magazine! And not just a colorful grab-bag that also happens to contain text. That’s what we, as BELLA triste, stand for: That’s literature, as we understand it and love it, literature that breaks its boundaries and risks something, either in content or in form.

How many have you sold and what impact has this had on BELLA triste’s profile?

It’s still selling about twice as fast as usual, even faster if there’s just been something about it in the press recently. Lots of people order multiple copies at once to give away. We’ve never really experienced that before.

This edition emphasizes our stance as a magazine that places value on design and print culture, but especially our love for experimentation.