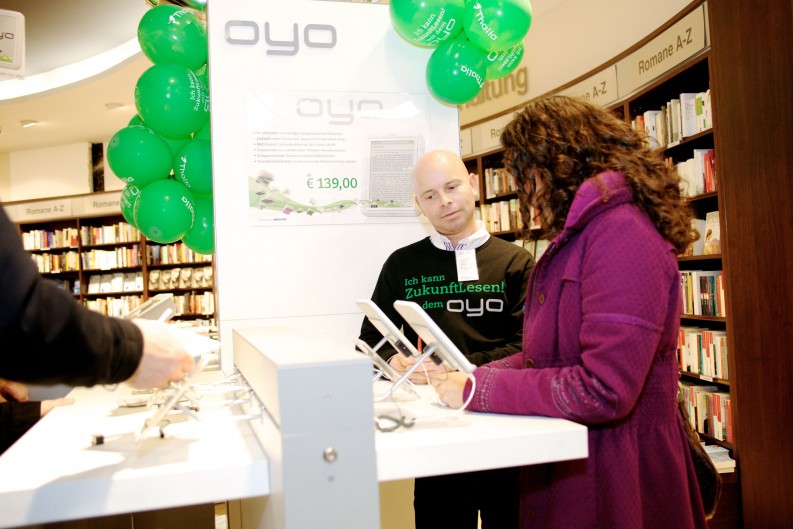 Thalia's OYO e-reader and online sales account for 14% of sales at the chain.

It’s not just US book retailing that is under financial pressure. Over the weekend, France’s “leading culture and technology” retailer FNAC announced that with overall turnover down 3.2% in 2011, the company was imposing several cost cutting measures, including laying off hundreds of staff. Of course, this is a very modest number considering the company has 17,000 people and runs 158 stores: 85 in France and 73 elsewhere in the world (Belgium, Brazil, Spain, Italy, Portugal, Switzerland and Morocco). The company is “evaluating” its overseas operations, and Italy in particular is identified as “where the environment is no longer conducive to Fnac-owned stores.” Finally the firm is also repositioning itself as a family-friendly retailer and will develop more attractions for children — a group that is still, for the most part, very loyal to bound, physical books. The company is not touching FNAC.com and its online operations or sales staff in the stores.

In Germany, the CEO of Douglas Holding — the company which owns Thalia, Germany’s largest bookstore chain, at 295 stores — is fighting rumors that they’re ready to break up the company. Henning Kreke told Reuters, “It is impossible to say at this stage what form a deal would take or even if it will come to a transaction,” he said. Still, the chain is suffering. It’s OYO e-reader went on sale last year and online sales now account for 14% of sales at the chain, but overall physical retail were down.  “[Thalia] must find the optimum way of integrating our traditional stores with our online shops so that we can leverage the potential of the new megatrend, the e-book,” Kreke said, adding, the company needs to find a way to compete with the “extremely rapid development” of Amazon, which launched it’s Kindle in Germany last year. Were Kreke to take our most recent survey, he’d surely call Amazon a “highly disruptive” force in the market.

In the books division, the Thalia Group, along with the entire traditional bookselling sector, was confronted with dramatic changes in customer buying habits. On one hand, more and more customers are buying books online, and, on the other, digital books (e-books) are gaining increasing importance. Both of these developments are creating major challenges for all brick-and-mortar bookstores. The Thalia Group has reacted quickly to its customers’ evolving preferences and has implemented a host of targeted measures. The online shops were expanded and new, user-friendly features added. A new e-reader, the OYO, was launched on the market and the number of available titles in the Thalia e-bookstore was increased significantly. Additionally, the bookstores have added attractive new products. These measures have enabled the Thalia Group to largely compensate lower revenue in the traditional retail bookstores by achieving considerable growth in its online business.

Overall, the Thalia Group increased its sales revenue in the 2010/11 fiscal year by 3.2 percent to EUR 935 million. While sales in the 295 Thalia bookstores in Germany, Austria, and Switzerland fell by 1.5 percent, online sales of the Thalia Group rose substantially by about 20 percent. Thus, online sales already account for about 14 percent of Thalia’s total revenue. In Germany, sales rose by 2.0 percent to EUR 704 million, with higher online revenues having a positive impact. Foreign sales were up by 6.8 percent to about EUR 231 million, mainly due to foreign currency effects and the opening of new stores.

With an EBT of EUR 5 million, the books division reported results that were significantly lower than the previous year by EUR 20 million. Even after the adjusting for the revaluation of buch.de shares, the result still fell by EUR 14 million. This decline resulted largely from the industry-wide shift of sales from brick-and-mortar retail bookstores to the Internet.