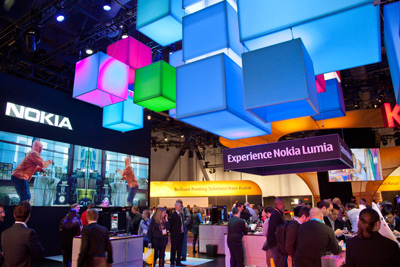 When it comes to Las Vegas, opinions vary. You either love or hate this desert city, but with an overabundance of hotel rooms, Vegas is the perfect location for the Consumer Electronics Show (CES), an annual gathering of the consumer electronics industry, an ever-growing industry that loves to celebrate itself.

On a show floor of around 180,000 square meters, more than 3,000 exhibitors present 20,000 products to journalists and trade visitors.

The top dogs at the show — electronic companies like Sony, Samsung, Panasonic and LG — present hundreds of their newest products at enormous, flahsy stands. Microchip makers like Intel, Marvell and Qualcomm also attend. You’ll also find mobile companies including Nokia and Blackberry, and camera manufacturers including Nikon, Canon and Fuji.

There was a surprising increase in the number of car manufacturers exhibiting at CES this year compared to 2011. In addition to showing off their latest car models, companies like Ford, Mercedes, Audi and Kia also presented telematic (a combination of telecommunciation and information, like navigation systems) and info-tainment systems.

Absent but Everywhere: Apple and Google

Despite not having big stands at CES, Apple and Google dominated this year’s CES. With the launch of their mobile operating systems, Apple and Google have created the two dominant mobile platforms worldwide: iOS and Android. Thousands of companies around the world use these platforms to launch new products and services in a quick and cost-effective manner. Google’s Android platform not only powers smartphones and tablets, but also televisions and cameras.

This post-PC era — a term coined two years ago by Steve Jobs — is quickly taking shape.

This Biggest Trends at CES 2012

Televisions
Televisions were the trend at this year’s CES. New models were bigger (84 inches), flatter (4 millimeters), and available with higher resolutions and better picture quality. The new smart TVs are connected to the internet, and offer integrated apps like Facebook, Twitter, Yahoo and Netflix.

Television makers seemed unsettled by the rumor that Apple would release its own television set and, like the iPhone did to the mobile market, disrupt another industry. Smartphones
Google’s mobile operating system, Android, has a worldwide market penetration rate of 47%, followed by Apple’s iOS (29%), Blackberry (17%) and Windows Phone (5%). It came as no surprise that many of the new smartphones on display at CES were running Android. The most hyped phone at the show, the Samsung Galaxy Note, also uses Android and will ship with a stylus for taking handwritten notes. Despite its massive 5.3-inch display, the Galaxy Note fits astonishingly well in your hand. (You’ll have to get over the awkward feeling that your holding a small tablet PC up to your ear.)

One of the biggest success stories from the show this year belongs to Nokia and its new Lumia 900 smartphone, which uses the Microsoft Windows Phone 7 operating system. This device was awarded numerous prizes during CES and highly praised in the trade press. One disadvantage, however, is the limited number of apps available for Windows Phone 7. The device will likely be available in the USA in March. (Microsoft opted not to exhibit at this year’s CES because the early date of this year’s show did not sync well with Microsoft’s product development cycle, and because CES decided not to give Microsoft an opening keynote slot this year.)

Tablet Computers
Tablet computers are still a hot trend, and are now being marketed for use in schools, stadiums and offices. In 2012, experts predict that approximately 100 million tablet devices will be sold worldwide. Apple is the dominant player with 60% of the tablet market. The starting price for tablet computers is around $250 today. Industry insiders expect Google to release its own tablet sometime this year, but there was no sign of any Google tablet in Las Vegas.

Within two years, tablet computers could become a large part of the personal computing market, with significant growth expected over the next year. As prices of tablets have gone down and potential applications of these devices have increased, E-Ink e-reader devices are seen less and less at CES.

Ultrabooks
No, not books with extra special features. Ultrabooks are extremely thin, lightweight laptop computers. This new market segment grew out of the popularity of Apple’s Macbook Air. The base price for Macbook Air competitors is around $800. Companies exhibiting ultrabooks included Lenovo, Samsung, Dell and HP.

Other CES Trends
Manufacturers of device accessories, so-called “electronic fashion,” were well represented on the show floor. This competitive market segment offers cases, bags, skins, protective covers, especially for iPhones and iPads, but also for smartphones and tablets from other manufacturers.

CES is not just for the electronics manufacturers and technology companies anymore. In addition to new players in the tech world, like carmakers, CES is a big draw for people working in creative industries like Hollywood, who use the opportunity to exchange thoughts and ideas with hardware and software companies. Many discussions hinged on new types of interactivity between devices found in most living rooms: televisions, tablets, and smartphones. In the future, television programs will offer viewers the option to interact with shows in real time using apps on tablets and smartphones.

On the other end of the spectrum, some of the largest innovators are not at CES. Apple, Google, Amazon, and perhaps also Microsoft are choosing to host their own events. Nevertheless, CES is very much the trend barometer for the tech industry in the United States.

Thomas Minkus is VP of English Language Markets for the Frankfurt Book Fair. Based in the Book Fair’s New York City office, he spearheads the company’s activities in the fields of digital and mobile publishing, as well as new rights initiatives. In addition, he is responsible for Fair’s exhibitors and customers in all English-languages markets and those from the STM and education sectors. Thomas is also one of the co-founders of Publishing Perspectives. An online publishing newsletter, Publishing Perspectives delivers daily international news and opinion about the industry from top members of the global publishing community. Prior to joining the Fair in 2003, he worked as VP of Sales & Marketing for Learn Technologies, an educational publishing and technology company in New York City.