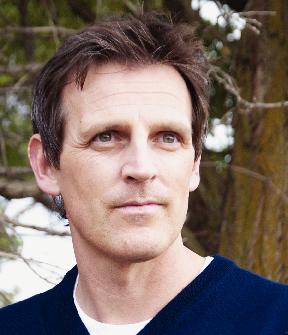 “While I was writing, I was thinking about how [the book] would become something else.” Patrick Carman is a traditional storyteller — the author of the bestselling YA series The Land of Elyon and Atherton, he’s also the creator of the popular and innovative 3:15 website, which uses a variety of media to encourage young readers to become interested in reading short stories.

And in his latest novel, Dark Eden, published this month by Katherine Tegen Books as an app for the iPad, Carman again pushes the boundaries of YA fiction by using text and video to tell the gripping story of seven young people forced to face their deepest darkest fears. Looking backwards, with references to Edgar Allen Poe, John Steinbeck and Kobo Abe, while exploring the future world of transmedia, Carman is very much a writer of and for our time.

I recently had the opportunity to interview Patrick via email, where we discussed transmedia, the desirability of book apps, and whether multimedia publishing can eventually lead young readers to Charles Dickens.

PP: Assume I’m a complete tech idiot — explain to me how the whole multimedia aspect of the book works and why I would want to do it.

PC: Dark Eden is designed to reach different kinds of readers. For traditional readers who prefer to read words, the book will give them exactly what they’re expecting (plus some amazing drawings from artist Patrick Arrasmith, who we were very lucky to have on the project). But I’m also interested in finding new ways of reaching very wired teens. And let’s be honest. Most of today’s teens are jacked in, wired up, and buzzing on tech throughout a normal day. The Dark Eden app tells the exact same story as the print edition; it just does it in a totally different way. With the app version, a participant enters into the story through a series of maps. Within those images are numbered icons that must be opened in order. There’s no way of knowing what’s behind the curtain of each number until they’re tapped, but every icon unlocks one of three things:

I’ve had a lot of email on the app, and the overall viewpoint has been something along the lines of the following: I don’t know what I just did, but I liked it. So the Dark Eden app is extraordinary in that it’s a new palette. No story that I’m aware of has ever been told this way. It’s not a novel, it’s not an audio book, andit’s not a movie. It’s all three at one time. For some teen readers – the one’s publishing has lost in a rising tide of video games, movies, TV shows, the Internet, and cell phones — this is the kind of experience that will help them enjoy reading again. It’s a lifeline back to books, if you will. For traditional readers, it’s a new way to imagine what reading can be.

But given that, is there a risk that even though using multimedia encourages reading, it will lead to eventual disappointment when everything isn’t multimedia? Will going from you to, say, Dickens, be a letdown?

About half the books I write include zero multimedia, and that’s by design. My follow up to Dark Eden will be a traditional three book series for teens. If someone has experienced the Dark Eden app and liked it, maybe they’ll want to read the more traditional follow up by the same writer. So there is a strategy at play here, and its goal is to bring jaded young readers back to books. Having said that, in today’s kinetic tech culture, I think Dickens is a challenge for any teen reader. I’m not saying that’s a good thing, but I’m convinced it’s the reality we faced as publishers, writers, and educators. Saying it’s not so won’t make it true, and we have to evolve in order to survive. Think of Dark Eden as a bridge to contemporary YA. The bridge to Dickens is a bit longer, but for some readers, that first step might lead to the streets of London in due time.

Given how Dark Eden changes what “reading” means, how does it change the writing process for you? Which comes first — the writing or the app?

I wrote the Dark Eden book first, but while I was writing, I was thinking about how it would become something else. When I finished the book, I worked with my director and writing partner to re-write the entire story for the app version. I’ve done this before with other projects like Skeleton Creek and Trackers and 3:15, and in every case, it’s a somewhat terrifying process to go through. The final document for the Dark Eden app was three inches thick, encompassing about 100 different assets that needed to be created. The hard thing about starting at a document like that is the uncertainty of it all. I stared at that binder of paper for a long time and wondered if it would all come together and form an experience as strong as the traditional book. There’s no way of knowing when you’re doing something that no one has ever tried. The only way out is to keep going, keep building, and always keep the basics top of mind: is this clear, is it compelling, do I want to follow these characters? I think the Dark Eden app works, I’m satisfied. Time will tell us whether participants feel the same way.

I downloaded the app for 3:15, and was fascinated by the way in which you transformed the basic short story into an audio introduction/text middle/video at the end experience. Can you tell me a little about it came about? And again, are you concerned that readers will grow up expecting all their texts to be like this and won’t be satisfied with simply reading a story?

The strategy with 3:15 is the same as everything else we’ve been talking about here. I love short stories, but they’re not very popular among teens and pre-teens (and actually, not very popular among adults, either). I was reading a short story a year ago by Flannery O’Connor and when I got done, I was a little bit angry. Why don’t more people read this stuff!? Why is this powerful experience being missed? 3:15 came out of that frustration as I began thinking about how short stories could be re-imagined for a new readership. The Twilight Zone informed the structure, because I thought having a host for a series of stories would help draw young readers into the experience. It was shortly after that I decided that it would pull in readers even faster if they could actually hear the host introduce the story, and thus Paul Chandler was born. At this point I’m hoping I’ve earned ten minutes of reading out of a twelve or thirteen year old, because I’m also offering a payoff — they get to watch how the story ends. All of this thinking came together perfectly in the series title, 3:15. The three stands for listen, read, and watch, and you do it all in fifteen minutes or less. For a young reader, this is an enticing bargain, but again, the endgame isn’t 3:15. My desire is that they move on to Chris Crutcher, Holly Black, Jonathan Strahah, and a host of other writers creating traditional short stories for teens.

How did your desire to go multimedia start?

Ten years in advertising and five running an internet start-up in the first .com boom certainly played a part. I was hard-wired to break the rules before I showed up in publishing. My experiences in those industries had a lot to do with making new rules in order to be heard, noticed, and taken seriously. I side with the late Steve Jobs here: the people who are doing things no one else thinks will work are taking the biggest risks and have the best chance of creating real change. I’m not a genre-maker or a category builder — vampires, dystopian, what have you — I’m a palette changer. I’m watching where kids and teens are going and building new storytelling methods that will meet them where they’re at. The ultimate goal is to discover ways to make reading relevant in an increasingly noisy world. But to be clear, I don’t think all books should be brimming with multimedia. That would be a tragedy! These projects are designed to re-introduce reading to an audience that doesn’t think reading fiction can be enjoyable. In a perfect world, a teen experiences the Dark Eden app and it puts them back in the reading for pleasure game. The next story they pick up, I hope is in the form of a traditional novel. Last disclaimer: there are plenty of teen readers reading normal books. Bravo, young readers! But let’s be honest with ourselves as adult readers and writers: there are a lot of teenagers who simply do not read for pleasure. It’s off their radar. I’m trying to win them back.

[Personally] I’m inspired by great stories, and I’ll admit to not caring what form they take. A season of great TV (Mad Men, The Good Wife, Battlestar Galactica), a riveting movie (The Matrix, Shine, Good Will Hunting), a video game (spend four bucks on LIMBO in the X-Box arcade and prepare to be wowed by a brilliant narrative), or a really good read (recent loves include The Lonely Polygamist and Freedom). It doesn’t matter to me. If I’m swept up in the world of the story, I’m pleased.

And this get to a bigger point I’d like to end on: no amount of tech wizardry will turn a bad story into a good one. My stories have to hold up, because a video might get a young reader in, but they’ll cut and run as fast as they can turn a channel on a TV if the story isn’t any good and the characters are flat. In fact, I think the stakes are even higher with multimedia. Who of us have not seen a special effects powerhouse that we forget ten seconds after leaving the theater? The palette may have changed in some cases, but the job is still the same. Dark Eden, whether it’s consumed as a traditional book or a multimedia app, has to deliver on the promise of a great story. I hope I’ve succeeded on both cases!